Rushed affair as pub steps up to stage contentious pageant 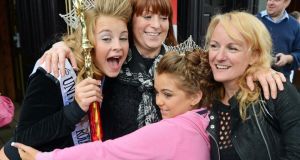 Phoebe McCallan (left), overall winner, and Bryony Way (8) with their mothers Hayley Way and Michelle Watts, all from Portsmouth, England, at the Universal Royalty pageant, which was held at Corrigan’s pub in Castleblayney. Photograph: Eric Luke

All the glamour that was left of the Universal Royalty child beauty pageant in Castleblaney was Lisa Roonea, winner of the 11-13 age group, standing on the pavement in her tan and her sash, looking tolerant. And Chisom Ezeh, almost two, crying briefly inside Corrigan’s Kitchen pub, as she had to put on her pretty dress again for a photograph.

The pageant, hastily reconvened after losing its chosen venue at the last minute, and slightly rushed for fear of protesters, was finished by about two on Saturday afternoon. By 3pm the child exploitation was over. Damn. Now the fake tan, the false nails, the false eyelashes, the wiglets, the sequins and the strangely spelled names had been packed up and taken away.

The overall winner of the competition, Phoebe McCallan, was presumably heading home to Portsmouth. And Lexi Nolan and her mother, Kylie Drew, were probably thinking about going back to Australia. It had been a stormy week for child beauty pageants, with a public outcry which was notable mostly for its unanimity. Minister for Children Frances Fitzgerald had described the event as “inappropriate sexualisation of very young children” .

At the last minute the Bracken Court Hotel, in Balbriggan, north Dublin, said it would not be holding the pageant as arranged.

No venue
When Annette Hill, the owner of the Universal Royalty pageant brand, pageant judge Mickey Wood, and Stephanie Murphy, mother of a contestant, went on the Late Late Show on Friday, they still did not have a venue for the competition next day.

Behind the scenes, Universal Royalty’s Irish contact, Adele Povey, was working the phones, trying to find another venue. “She was on it like white on rice,” says Hill approvingly. “That’s a Texas expression.”

The hot breath of Texas can be felt everywhere in the Universal Royalty pageant, and perhaps in all pageants, everywhere. Hill is six foot and from Austin where she employs a staff of 15. She paid her way through college by entering pageants herself, she says. “Talking was my talent,” she says. “I always got a standing ovation.”

She did not get much chance to talk during the Late Late appearance, which was dominated by Mickey Wood and the unnerving sight of her daughter, Eden Wood (9), wriggling like a tiny Mae West.

Hill is silent on the subject of Eden Wood. Later she explains that she wants her competitions to be “elegant and classy”. On her phone she has photos of her two daughters Symon and Shea, who are great beauties, and of her handsome husband who is a sheriff in Texas.

Adele Povey has a picture of her beautiful daughter on her phone too. Jade Marrey, now 18, won the overall Universal Royalty Grand Supreme title in Texas last November. “Who wouldn’t want that crown?” asks Povey.

There was also a five-foot trophy. “We had to buy an extra suitcase to bring it home.” Povey, a single mother of three, is slim and beautiful. “She is a fox,” agrees Hill. As a child growing up in England, Povey was a child model. “Commercials, that type of thing.” She seems to believe in modelling.

Online comments
Her young son Tiernan is the face of Persil, she says. Povey was most insulted by online comments posted by readers on newspaper sites. “They were saying that the mothers at pageants were trashy, uneducated and not working.”

She wants to point out that she is middle class and working in technical sales.

But surely parents should protect their female children – there was only one boy competing in Castleblaney on Saturday – from the labours of grooming and glamour for as long as they can?

“Don’t get me wrong,” says Hill. “I hate dressing up. At home my husband calls me Bill.”

But Hill and Povey say that life is a competition, wherever you go, so best be prepared for it.

Whatever happens, they agree, unless a government bans child pageants, as the French government has done, they tend to stick around. The glamour, the condemnation, the cloudy heart of motherhood, these things are irresistible – and not just in Texas.