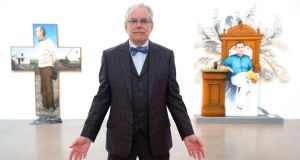 Artist Robert Ballagh was among the recipients of the 2016 awards. Photograph: Michael Mac Sweeney/Provision

Artist Robert Ballagh and the Dublin Fire Brigade are among the seven recipients of the Lord Mayor’s Awards for 2016. Lord Mayor of Dublin Críona Ní Dhálaigh gave awards to Ballagh and six local and national organisations at a ceremony in the Mansion House last evening.

Since 1989, the annual ceremony has honoured individuals and groups who have made a special contribution to Dublin.

The Gay and Lesbian Equality Network (Glen) was chosen for the change it has helped to deliver as an advocacy group over 28 years.

The Ana Liffey Drug Project, which provides services to drug users and their families, and Na Gaeil Óga, a GAA club founded to provide opportunities for young Irish speakers to use the language in a sporting setting, also received awards.