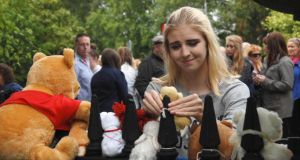 Ciara Gannon, Cobh, attaching her teddy bear to the gates of Bessborough during the Bessborough Mother and Baby Support Group memorial service in Cork.Pic: Provision

In 1933, the mother of a 19-year-old pregnant single woman from a remote rural region of south Kerry approached a neighbouring respectable and well-to-do woman “for help and advice” regarding her daughter’s circumstances.

The pregnant woman came from a poor and large family – with seven children – who lived on a small farm of five cows.

Acting as a conduit for the girl’s mother, the neighbour arranged with the Kerry board of health and public assistance – the local authority responsible for poor relief – to have the girl committed to the Bessborough home in Cork city, a mother and baby home which was run by the Order of the Sacred Heart, and was initially established in 1922 for “unmarried mothers” with one child as part of the reform of the poor law and workhouse system.

Within three months of the woman’s committal, her father wrote to the Kerry board of health who were paying for her maintenance stating: “I would like to let you know I want to bring home my daughter . . . and baby.”

However, the secretary of the Kerry County Council, Padraig O’Mahony, refused to sanction the father’s request.

O’Mahony joined the IRB in 1905 and was involved in republican politics during the Easter Rising, subsequently emerging as one of the leading Sinn Féin organisers during 1917-21 in the south of Ireland. After the establishment of the Free State, he was appointed to the leading local authority position in Kerry.

O’Mahony wrote to the neighbour who originally arranged for the woman’s committal asking if her removal from Bessborough was “in accordance with the desires of the persons who were responsible for incurring expense in her reclamation”.

In reply, the neighbour wrote that she “very strongly opposed the girl’s return” home, believing that her parents lacked the “character to control her” and she would “very likely fall again under the evil influences which were instrumental in her downfall”.

The neighbour was also of the belief that her presence would be harmful to the younger sisters and the “little girls of the neighbourhood” would be given the “impression that, having been placed under care . . . they could come and go as they please”. She also believed that the “family should moreover remember that the board was paying for the girl’s maintenance”.

At a wider level, the religious authorities, and government officials, preferred women to stay for a sustained period: the 1927 Commission of the Relief of the Destitute and Sick Poor recommended that women in mother and baby homes remain up to a year and in many cases women stayed much longer. In turn, the father’s wishes were not acceded to.

The details of this case, buried in the local authority records of Kerry County Council, demonstrate the complex dynamics and social forces that led to so many women entering and remaining in mother and baby homes in independent Ireland such as the Tuam mother and baby home which is the focus of the current controversy.

Local decision-making on why women were committed and their length of stay was influenced by a range of factors, including fear of the woman’s potential relapse and the threat that she posed to the local community, and the potential reputational damage to the institution. Social and class bias was even more apparent as demonstrated in the concerns over the perceived character of the parents.

Furthermore, the opinion of the “respectable” woman was sought over the financially poor parents by the local government official. The voice of the female subject to the committal to Bessborough, perhaps unsurprisingly, was not heard at all in the records of this case.

Along with the influence of religious authorities, deeply entrenched social, gender and moral prejudices prevailed among officials and many within society, particularly those considered respectable, which helped to create the wider societal and cultural environment in which institutions such as mother and baby homes existed.

With the increasing likelihood of an inquiry into mother and baby homes in response to the Tuam controversy, this case demonstrates that local and central government archival evidence – largely in the hands of the State – has the potential to unravel the complex place these institutions held within local society and communities, particularly during the early decades of independence for when limited oral testimony survives.

Finally, recent events have further demonstrated the importance of Irish social history, particularly in light of the on-going “Decade of Commemorations” which remain largely focused on political events.

Dr Seán Lucey is an historian based in Queen’s University Belfast. His next book The End of the Irish Poor Law? Welfare and Healthcare Reform in Revolutionary and Independent Ireland is forthcoming with Manchester University Press.