Report says children should get two years of free pre-school 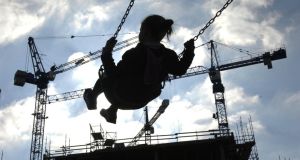 The report advises reviewing guidelines for pre-schools to ensure all children in early care and education services have access to outdoor spaces, either on site or in the local community. Photograph: Frank Miller

The free pre-school scheme should be extended to allow children up to two years of care and education. That is one of a number of proposals contained in an expert advisory group report on the Government’s new early years strategy.

This blueprint will guide the development of children’s services over the next five years or so. At present, the terms of the free pre-school year mean some children do not begin the scheme until they are 4½ years old. It is also limited to a single year.

The expert group report says it should be opened to children of three years of age. This would allow children to benefit from up to two years of free pre-school, depending on when they start junior infants. It also advocates increasing investment in early care and education from 0.4 per cent of GDP to 0.7 per cent within the next five years.

The document notes that Government spending on early years care and education is below “acceptable levels” and that investing in young children’s health and education will ultimately save money for and result in a healthier and better educated workforce . The report says that if Ireland “gets it right from the start” by adopting a comprehensive early years strategy, we will end up with a generation of children who are happier, healthier, safer and better able to cope with the adversity that life throws up. “It could break cycles of poverty and disadvantage and remove barriers of inequality. It could significantly reduce anti-social behaviour, dependency, and alienation. It could help to build a stronger economy,” it adds.

The expert advisory group was chaired by Dr Eilis Hennessy of UCD and included 15 members from a range of groups such as the HSE and Department of Education, along with children’s groups such as Early Childhood Ireland, Barnardos and Start Strong.

EARLY YEARS STRATEGY: KEY PROPOSALS
- Extend the entitlement to free pre-school provision, so that a free part-time place is available from every child’s third birthday until they enter primary school.
- Introduce the regulation and support of all paid, non-relative childminders.
- Increase investment in early care and education services, with investment rising to achieve the international benchmark of 1 per cent of GDP within 10 years.
- Give longer periods of paid parental leave for parents by incrementally extending leave at the end of the present period of paid maternity leave (six months) to a full year.
- Put public health nursing service at the core of a
dedicated child health
workforce, including home visits to every child in the first year of life.
- Introduce a national parenting action plan aimed at making a range of universal and targeted supports available to parents.
- Review guidelines for pre-schools to ensure all children in early care and education services have access to outdoor spaces, either on site or in the local community.
- Introduce a national policy on access to pre-school special needs assistants, including guidelines on entitlements to such supports and on their role in early years and primary school provision.

Proposals contained in Report of the Expert Advisory Group on the Early Years Strategy to the Minister for Children and Youth Affairs. This document will feed into a Government blueprint to be published later this year.