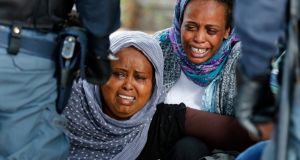 African migrants become upset as Italian police attempt to remove them at the Franco-Italian border between Menton and Ventimiglia during June 2015. Photograph: Sebastien Nogier/EPA

Reaction to the report on reforming the asylum process has been mixed, with some NGOs calling for its swift implementation and another describing it as a “missed opportunity” for deeper reform.

In contrast, a Government TD urged caution, saying it would be “unwise” to implement key aspects until a clearer picture emerged on the level of immigration from north Africa into Europe.

The final report from the Working Group on Improvements to the Protection Process, including Direct Provision and Supports to Asylum Seekers was published on Tuesday afternoon.

The Children’s Rights Alliance, which was on the report’s working group, said the recommendations, if acted on, would “radically change children’s lives”.

They would be better supported financially, in education, with regards to their emotional and physical health and would be able to bring complaints to the Ombudsman for Children.

Spirasi, which works with victims of torture and was also on the working group, said there was “a moral imperative for the State to implement the recommendations…without delay”.

The United Nations High Commission for Refugees in Ireland, also on the working group, said all the recommendations in the report had been fully costed and agreed on by all Government departments and NGOs.

“The UNHCR believes the authorities should be able to implement them immediately,” said Sophie Magennis, head of office with UNHCR Ireland.

The Irish Refugee Council said the recommendations for reform of the application process, if implemented, would “greatly enhance” the system.

The IRC stood down from the working group in March as the group had not been consulted on the heads of the International Protection Bill.

Sue Conlan, chief executive of the council, said it was regrettable the report endorsed the practice of people being allowed to remain in the system for five years.

She said it was a “missed opportunity” for more radical reform.

Fine Gael TD John Deasy said while the report had “merit”, the Government “shouldn’t implement any changes until we are in a position to gauge the immediate consequences of a massive increase in economic migrancy [sic] and the effect that may have on genuine asylum seekers and our asylum process”.