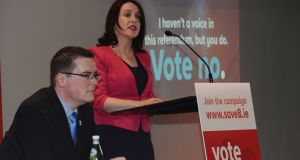 A prominent campaigner for the repeal side in the upcoming abortion referendum has accused the spokesman of the Save the 8th campaign of mounting a “sustained attack” on her through social media.

In a statement on Friday, Janet O’Sullivan, who also goes by Janet Ní Shúilleabháin, said the dispute centred on remarks she made on Twitter following the death of former Fine Gael TD Peter Mathews.

1 Why you still can’t have a European holiday this summer. Or can you?
2 Donald Trump’s political success is based on racism
3 Oliver Callan: ‘I was a perfect candidate for exploitation’
4 The night shift: ‘In 38 years, I’d never seen an owl in the city centre’
5 David McWilliams: We won't have another 1980s-style recession
6 Ireland earns ‘right to be hopeful’ again as Government fast-tracks plans to reopen country
7 Fintan O’Toole: The violence of racism is deeply embedded in American society
8 Ross O’Carroll-Kelly: ‘We’re having a fancy dress porty. I’m going as the wife of a philanderer’
9 ‘White Irish people have never had to think about this’
10 Coronavirus: People to be allowed to travel anywhere in their county from Monday
11 Why is Germany suddenly embracing its inner Keynesian?
12 Dublin nursing home to close as it ‘cannot meet regulatory requirements’
13 Passengers face queuing in car parks at Dublin Airport
14 Unlocking Ireland: What exactly will happen in reconfigured phase two on Monday?
15 Plans lodged for demolition of The O’Rahilly house
16 Tyrone midwife on the cover of Vogue magazine
17 Pubs reopening will not mean ‘fellas having a few pints and peanuts’, Holohan warns
18 Paul Flynn: ‘I still have all my old menus. One dish stands out: bang bang chicken’
19 Irish parents on schools reopening abroad: ‘It has gone suprisingly smoothly’
20 Betting shops face uncertain future as they prepare for Monday reopening
21 O’Doherty and Waters ordered to pay legal costs of case against State over Covid-19 laws
22 Covid-19 restrictions: What you still can’t do this weekend
23 Do I want things to go back to normal? I’m not so sure I do
24 Family killed in US after plane crashes en route to funeral
25 Mature Ringrose keeping the ups and downs of rugby life in perspective
26 Prospect of foreign travel highlights remaining restrictions here
27 All quiet on set: How do you make a TV drama in a crisis?
28 Donald Trump is in trouble, and that could spell very bad news
29 Major credit union plans to limit savings accounts to €40,000
30 Coronavirus: UK scientists call for preparation for second wave
31 ‘Summer is not lost’ - Taoiseach announces accelerated easing of coronavirus restrictions
32 Hosepipe ban looms: ‘We’re drinking tomorrow’s water today’
33 Cliff Taylor: Ireland steps on to a shaky financial tightrope
34 Government formation: Greens blame ‘slow’ Fine Gael for talks paralysis
35 Irish fears for Brexit talks if Hogan gets top WTO job
36 We need to pay very close attention to what is happening in Britain now
37 India overtakes Italy as sixth-worst country affected by Covid-19
38 WHO changes face mask advice, saying people should wear when unable to distance
39 Tesla’s Elon Musk calls for breakup of Amazon in tweet
40 Father Ted creator to publish spoof Dominic Cummings diary
Real news has value SUBSCRIBE