Where now for Catholic Church as synod nears end? 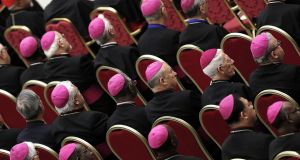 Bishops take part in the commemoration of the 50th Anniversary of the Synod of Bishops at Paul VI Hall, Vatican. Photograph: Giuseppe Lami/EPA

So the current Synod of Bishops in Rome enters the home straight. This week it is expected to get down to the substance of the three-week gathering. Towards the end of last week, its second week, it was clear that the getting-to-know-you phase among the bishops was coming to an end, with people speaking more openly and frankly.

As reported at the daily briefing in the Holy See press office on Friday, “discussions in the assembly were much more emotional in the last two sessions of the synod. The personal nature of the interventions arose from the fact that many of them were about actual pastoral cases. Some bishops read letters in the assembly that were written to them by people in their pastoral care who were hurting.”

Topics discussed in these emotional interventions included “procreation and contraception (the theology of Humanae Vitae, the encyclical which banned artificial means of contraception, was spoken about); the changes made by Pope Francis to the annulment process; violence, incest and sexual abuse within families, and the ‘martyrdom of silence’; the care of the elderly and their value in society; the formation of parents, because they shape future generations, and how large corporations and economic issues put pressure on parents to work long hours which disrupt family life.”

Clearly, it hasn’t all been about divorce, remarriage, or gay issues.

Interestingly, the bishops were also told that there were possibly three ways forward: “To do nothing; to move towards the ‘penitential way’ outlined by Cardinal Walter Kasper (where the divorced and remarried are concerned); or stand firm and reaffirm the church’s current position”.

After five weeks of discussion, two weeks in October of last year and three weeks this year, and with the “merciful” words of Pope Francis permeating all, it is highly unlikely that this synod will do nothing or end by just standing firm. There is no question of it changing any church teaching on marriage or whatever. That was never its purpose. It is about pastoral responses to realities.

He added: “People say to me: ‘Can there be any change?’ If you take the speech the pope gave at the end of the synod last year and you take the speech that Pope John made at the opening of the Second Vatican Council, you’ll find exactly the same themes. The pope said we all know the doctrine; it’s not a question of changing it, but it’s not just a question of repeating it. No change in doctrine at the time of the council brought about [the] huge change in the practice of the church, the way the church lived. Is it possible to do the same here?”

That is the question. And that said, the archbishop’s own intervention at the synod was odd. Referring to the same-sex referendum in Ireland last May, he said it was debated “within a social culture where people struggle to understand abstract moral principles”.

Particularly offensive to many who support same-sex marriage was his statement in the intervention that “when the demanding teaching of Jesus is presented in a way which appears to lack mercy, then we open the doors to a false language of cheap mercy”.