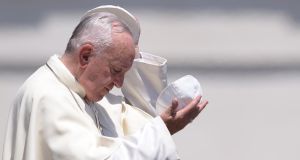 Several of Ireland’s Catholic bishops may be subject to investigation by the new Vatican tribunal announced this week by Pope Francis (above). The tribunal will hold bishops to account where it is claimed they failed to protect children from sexual abuse by priests. Photograph: Filippo Monteforte/AFP/Getty Images

At least 12 of Ireland’s Catholic bishops may be subject to investigation by the new Vatican tribunal announced this week by Pope Francis.

The tribunal will hold bishops to account where it is claimed they failed to protect children from sexual abuse by priests.

It is being established following a proposal by the Vatican Commission for the Protection of Minors. It was unclear on Wednesday whether the tribunal could deal with retrospective cases of negligence by bishops, but it has now been confirmed that it will have such powers.

Speaking to The Irish Times yesterday, Dublin abuse survivor Marie Collins, a member of the commission, said she had that morning sought clarification on the matter and it was confirmed to her the new tribunal will have such retrospective powers.

It was also confirmed the tribunal will include lay members, men and women. She believed a similar tribunal would be set up to deal with religious superiors in the same situation.

Among living Irish bishops who have faced serious criticisms over their handling of clerical child sex abuse allegations in the past are Cardinals Desmond Connell and Seán Brady, as well as Bishops Brendan Comiskey. Donal Murray and Jim Moriarty resigned following publication of the Murphy report in 2009.

Cardinal Connell and Bishops Murray, and O’Mahony were all criticised in the Murphy report, which also led current Dublin Auxiliary Bishops Eamon Walsh and Ray Field to submit resignations to Rome. These were not accepted by Pope Benedict.

Bishops Daly, Hegarty, Boyce, Kirby, Duffy, and Casey were all strongly criticised in reviews conducted by the church’s own child protection watchdog, its National Board for Safeguarding Children.

Ms Collins said she agreed with the Catholic primate Archbishop Eamon Martin, who told the media at Maynooth on Wednesday, “I think that justice is indeed retrospective. I mean when it comes to something like child safeguarding… just because something happened a long time ago doesn’t mean you’re not accountable for it now.”

He was speaking at the end of the Catholic bishops’ summer meeting. He admitted he and the other bishops were not fully aware of Pope Francis’s tribunal announcement earlier that day, “but I would welcome any decision by the Holy Father to hold all of us accountable”, he said.

He continued “I think what [Pope Francis is] really saying is that, look, when it comes to an issue as serious and as important as child safeguarding, everyone in society is accountable, and their office should not protect them.

What Pope Francis proposed was “ not a substitute for the criminal justice system”, he added.