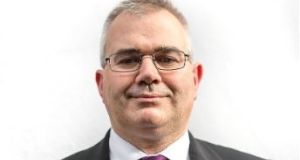 Ken Curtin of the Social Democrats was told by the administrator of St Colman’s Cathedral in Cobh he was being removed from the Mass reader rota because of his party’s support for removing the Eighth Amendment on abortion, which gives equal rights to the mother and unborn child. File photograph: Socialdemocrats.ie

A Social Democrats election candidate who was dropped as a Mass reader at a Co Cork church because of the party’s support for repealing the Eighth Amendment on abortion has described a meeting with local Bishop William Crean as fruitful.

Ken Curtin was told last week by the administrator of St Colman’s Cathedral in Cobh, Fr John McCarthy, that he was removed from the rota because of his party’s support for removing the amendment, which gives equal rights to the mother and unborn child.

“[Fr John] said that regardless of my own personal position, either way, as long as I was a member of a party that was a supporter of something against a core Church belief, I couldn’t be a lector at the same time,” said Mr Curtin, who unsuccessfully ran for the party in Cork East in the general election.

Speaking after a meeting with Bishop Crean on Monday, Mr Curtin said he “got a good hearing” and the bishop “listened to my viewpoints and expressed a few opinions of his own”.

“I think we made some progress,” he said.

In a statement, the Diocese of Cloyne said a “cordial and fruitful meeting was held between Bishop Crean and Ken Curtin” describing the encounter as “pastoral in nature”. It said a meeting involving Fr McCarthy would be held in the future.

Mr Curtin, who joined the Social Democrats after leaving Fianna Fáil last year over its approach to the marriage equality referendum, said he got a sense from Bishop Crean “that he was of the view that a person’s membership of a political party was not grounds for excluding a person from having a role in the church”.

Mr Curtin said he did not believe the bishop had a problem with him campaigning for marriage equality and “did not see that as a grounds for removing somebody as a lector in the church, so that was very encouraging to hear”.

Mr Curtin said he had told the bishop the incident and response to it was “almost like setting a precedent, and there has to be consistency as well - that you just can’t remove one person because of their viewpoint and leave others with perhaps even more radical views in place”.

“I pointed out that it could have a knock-on effect, not just in this church and diocese but elsewhere as well, because Repeal the Eighth Amendment is going to be a central issue, with almost all political parties, save Fianna Fáil, having some position on it.”