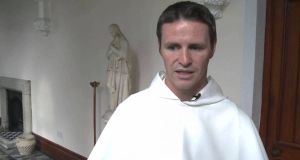 Brother Philip Mulryne (38), who won 27 caps with Northern Ireland, will be ordained a priest next year

A former Northern Ireland soccer international has been ordained a deacon of the Catholic Church by Archbishop of Dublin Diarmuid Martin.

Belfast-born Brother Philip Mulryne (38), a member of the Dominican congregation, will be ordained a priest next year. He made his debut for Manchester United in 1995 before moving to Norwich City in 1999. He also played for Cardiff City, Leyton Orient and Kings Lynn, and won 27 caps with Northern Ireland before retiring from football in 2008.

In 2009 he began studying for the priesthood.

He was ordained at a Mass in St Saviour’s Church on Dominick Street in Dublin.

Last July eight Dominican Brothers were ordained to the priesthood at St Saviour’s, while last month five novices began studies at St Saviour’s. Earlier this year Irish provincial Fr Gregory Carroll said the Dominican’s Irish Province had not had this many deacons since the early 1970s.

2016 marks the 800th anniversary of the founding of the congregation known as the Order of Preachers (OP) by St Dominic, an event marked on September 28th by a jubilee concert at the National Concert Hall attended by President Michael D Higgins and Tánaiste Frances Fitzgerald.

In 1224 the Dominicans arrived in Ireland. They number about 140 at the moment, a majority of them over 60. The congregation has three orders: friars, enclosed contemplative nuns, community nuns and laity.

Meanwhile, single women between 20 and 40 who are interested in the contemplative life as lived by Dominican nuns are invited to a day of prayer and reflection in the Siena monastery at The Twenties in Drogheda, Co Louth on Saturday, November 12th. Details at siena3@eircom.net or 041-9838524.