Religious delegation from Syria in Ireland to campaign against EU sanctions 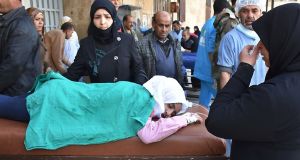 An injured Syrian girl lies on a stretcher outside a hospital in Aleppo. Photograph: George Ourfalian/AFP/Getty

Christian and Muslim leaders from Syria arrive in Ireland on Tuesday to lobby against European Union sanctions on the country.

They will address the Oireachtas Joint Committee on Foreign Affairs on Thursday morning. Afterwards, they will lay a wreath at the at the corner of Trinity College Dublin and Kildare Street to commemorate all victims of violence, in Dublin and Syria in particular.

On Wednesday the group will take part in a religious service in the chapel at Trinity, followed by a discussion with senior academics, politicians, medical personnel and members of the diplomatic corps on further initiatives to advance the Syrian peace process.

They will be accompanied by two Syrian surgeons, who will explain the negative effects sanctions are having on Syria’s hospitals, where people are dying every day due to lack of medicines.

Dr Ahmad al Khaddour is a cardiothoracic surgeon and professor of medicine at Damascus University. He is a native of Homs, which has witnessed many atrocities. Dr Bashir Mohammad is a cardiologist from Hama, where there is still heavy fighting.

They say that the EU’s sanctions are killing more Syrian children than Islamic State. They claim that the US has yet to deliver food or medical aid to Aleppo, whereas the Russian air force, despite the ongoing bombardment, continues to fly in many tons of food, clothing and medicines.