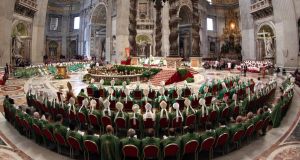 Pope Francis launched the Extraordinary Synod of Bishops on the family in Rome yesterday with a warning.

“Synod assemblies are not meant to discuss beautiful and clever ideas, or to see who is more intelligent,” he said. “The Lord is asking us to care for the family, which has been from the beginning an integral part of his loving plan for humanity.”

The synod, on the theme of “the pastoral challenges of the family in the context of evangelisation”, is due to discuss Catholic church teaching on such issues as marriage, divorce, contraception and same-sex unions before it concludes on October 19th.

It is considered one of the most significant events of this papacy and many believe its outcome could well determine the legacy of Pope Francis.

In his homily at the opening Mass for the synod in St Peter’s Basilica, Francis said that “evil pastors lay intolerable burdens on the shoulders of others, which they themselves do not lift a finger to move”.

In attendance at the Mass were 253 participants in the synod, including 191 cardinals, archbishop and bishops, as well as 61 experts, fraternal delegates from other churches and some lay speakers. Archbishop of Dublin Diarmuid Martin attended as representative of the Irish Episcopal Conference.

In his homily, Pope Francis reminded them that in the gospel story of the vineyard, “It is the farmers themselves who ruin the Lord’s plan: they fail to do their job but think only of their own interests.”

The formal business of the synod begins this morning. Media are not allowed at any synod sessions but will be briefed each day on proceedings by the Holy See press office.