Pope Francis tries to undo the knots, but opposition remains 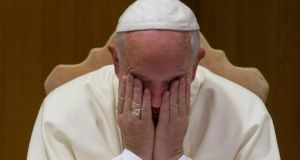 Cardinal George Pell was in jocular form during the first week of the current synod of bishops in Rome. Prefect of the Vatican’s Secretariat for the Economy, he was speaking about the media at the North American College in Rome.

“A free press is absolutely essential in a free society,” he said, advising the seminarians present to get in there, “present our case and create a bit of a fuss. Keep God in the news.”

But he had a warning. “There is always a risk in the interaction between senior church people and the media,” he said. And he told the story of the arrival in New York of the former archbishop of Canterbury George Carey.

No doubt this week Pell felt reinforced in his view on senior church people and the media. The enthusiasm with which the synod’s midway document Relatio Post Disceptationem, published last Monday, was received by the wider world alarmed many of a more conservative hue at the synod.

The document indicated a marked shift in tone at the Vatican concerning gay people and spoke of speeding up the procedure of marriage annulments.

Staff at the Holy See press office rushed out the next day to assure everyone: “That is not what it meant at all.” The Relatio was “a work in progress”, not a definitive document of church teaching on family life. (The final document of the extraordinary synod is to be agreed today.)

Participants at the synod were “concerned with the way the media has presented it,” said the official Vatican news service of the Relatio. Rather, the Relatio reflected “the rich and often heated debate” that had taken place in the Synod Hall.

“Not all the bishops attending the two-week meeting are happy with its style or its content. Some believe church teachings are confused and presented out of context,” it said.

It was always going to come to this. Some attending the synod are doggedly determined to maintain the status quo on the family. That night at the North American College, Pell made his own position very clear. “Some may wish Jesus might have been a little softer on divorce, but he wasn’t. And I’m sticking with him.” Catholics, he said, did not believe in “doctrinal backflips”.

Of similar mind at the synod are Cardinal Gerhard Müller, the Vatican prefect of the Congregation for the Doctrine of the Faith, and Cardinal Raymond Burke, prefect of the Supreme Court of the Apostolic Signatura. In the synod’s first week Müller openly reminded Pope Francis that even the pontiff cannot change church teachings on marriage.

Müller, Burke and Pell contributed to two books published on October 1st, just before the extraordinary synod, making clear their opposition to any change in church teaching on marriage. It was a direct response to Pope Francis’s indicating that such matters might be considered.

Adding fuel to a view that this too was part of a planned assault by those resisting change at the Vatican was the publication last week, in an Italian magazine, of an interview with Archbishop Georg Gaenswein, private secretary to Pope Emeritus Benedict.

He suggested the synod should offer solutions “not oriented on the spirit of the times but rather on the gospel”. Gaenswein, who is also prefect of the Papal Household of Pope Francis, said the current pope would follow the “teachings of his predecessors.”

Marriage, he said, remains an indissoluble sacrament, and the church “has always stated that homosexual acts are intrinsically disordered”.

The rigour and planning with which those opposed to change have undertaken their resistance underline the scale of the struggle they see before them. Arrayed against them, you might say, is a tide in church affairs.

It is also clear that Pope Francis knows what he is up against but remains unequivocal. He made this clear at Mass in Santa Marta last Monday, the morning the controversial Relatio document was published.

Dealing with the gospel account of Jesus meeting the Pharisees and teachers of the law, he asked, “Why were these doctors of the law unable to understand the signs of the times? . .

“First of all because they were closed. They were closed within their system, they had perfectly systemised the law, it was a masterpiece . . . And they were safe there.”

He noted that the Pharisees “did not like” Jesus. He “was dangerous; doctrine was in danger, the doctrine of the law”, which theologians had formulated over centuries. They had become “closed”, they had “simply forgotten history. They had forgotten that God is the God of the law, but He is also the God of surprises.”

On October 5th, at the Mass in St Peter’s Basilica to open the synod, Pope Francis warned that “evil pastors lay intolerable burdens on the shoulders of others, which they themselves do not lift a finger to move”.

The previous evening, at a two-hour pre-synod vigil in St Peter’s Square, he told the tens of thousands that “we must lend our ears to the beat of this time and perceive the scent of the people today, so as to remain permeated with their joys and hopes, by their sadness and distress, at which time we will know how to propose the good news of the family with credibility”.

He prayed: “May the wind of Pentecost blow upon the synod’s work, on the church and on all of humanity. Undo the knots which prevent people from encountering one another, heal the wounds that bleed, rekindle hope.”

And that would appear to be the task he has set himself: to undo those knots.