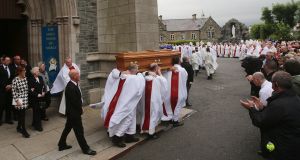 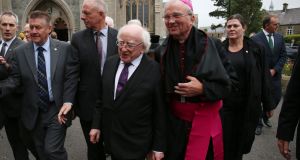 Former Bishop of Derry Edward Daly “showed physical courage on Bloody Sunday and his moral courage was evident in his passionate struggle against violence and injustice from all quarters,” his requiem Mass was told at St Eugene’s Cathedral in the city Thursday.

“It takes enormous courage to be a peacemaker and he was an apostle of mercy, whether as a curate, as a bishop or as chaplain in the Foyle Hospice. For that courageous service of God and of his people, we give thanks today,” said Mass celebrant Bishop of Derry Donal McKeown.

“It took enormous courage to build healing on the burning sands of war,” he said.

“We have seen how love can transform a blood-stained piece of cloth into an unforgettable symbol of divine compassion. Today we are grateful for Edward Daly and thousands of others across our community and churches who took risks and paid the price that peace might take root in our hearts and communities.”

A message of condolence from Pope Francis was read by Msgr Amaury Medina Blanco, representing the papal nuncio to Ireland Archbishop Charles Brown.

Speaking at the end of the Mass and just before Bishop Daly was buried in the Cathedral grounds the Catholic primate Archbishop Eamon Martin, himself ordained to the priesthood by Bishop Daly 29 years ago, said “Edward Daly was a great priest, a caring and compassionate pastor, a man of prayer and peace, a courageous and fearless leader, a special person.”

Among those who brought up offertory gifts were Bishop Daly’s housekeeper Betty Doherty; and Kay Duddy, sister of Jackie Duddy, the dying 17 year-old assisted by Bishop Daly on Bloody Sunday in Derry, January 30th 1972.

There too were Deputy First Minister of the Northern Executive Martin McGuinness, the Republic’s Minister for the Diaspora Joe McHugh, Fianna Fáil TD Pat the Cope Gallagher, SDLP founder John Hume and his wife Pat, his successor Mark Durkan and the latter’s nephew Mark H Durkan MLA, as well as Ivan Cooper, a major figure in the Northern Ireland Civil Rights Association during the 1960s.

“The Irish Catholic Church will never see anything like it again, at least not in my lifetime,” remarked a priest in St Eugene’s Cathedral earlier on Thursday.

It had been estimated that 25,000 people had filed past Bishop Daly’s coffin since it was placed before the altar there on Monday evening last.

As the priest spoke, more crowds were gathering for the sealing of Bishop Daly’s coffin in a brief midday ceremony. It was led by Bishop of Derry Donal McKeown, presided over by Catholic primate Archbishop Eamon Martin, there under the magnificient window depicting the life, death and resurrection of Christ behind the main altar.

Afterwards the coffin was moved to a side chapel to make way for the wedding of Gareth McIvor and Christina Doherty.

On Wednesday, eve of the funeral, people filed passed the late Bishop Daly’s coffin at the rate of an estimated 1,000 an hour, his shallow remains visible, fingers clasped around a rosary, a pectoral cross across his chest, a mitre on his head. A basketful of Mass cards lay before the coffin, a single dark red rose on top of them.

As cathedral Administrator Fr Paul Farren led the rosary at 10 pm, a man “from up the street” stood at the back door and commented “we are losing an icon. It was a tough gig being a bishop here during the Troubles. ”

He paused and gestured to the full-to-capacity cathedral in front of him in some wonderment and said, “look at the crowd!” A burly young man walked by in white T shirt, the year “1969” blaring in black across his chest.

Among the crowd that night was Catholic primate Archbishop Eamon Martin who came in quietly, spoke to some people and found a seat for himself half way up the centre aisle. There too in seated in similar humility was Bishop McKeown, in a side aisle.

There was no hierarchy among the mourners at Wednesday night prayers, just a general sadness at the loss of a man whose life was forever isolated by a deed on Bloody Sunday 1972. Then when he waved his white handkerchief, mottled red with the blood of one of his flock, as he sought help while bullets flew.

Earlier outside St Eugene’s another Derry icon expressed her great unhappiness in forthright terms to a pale young priest in the gloom at the Cathedral door.

“Are there seats reserved for relatives of the Bloody Sunday dead? Are there? I bet there is for John Hume?” Nell McCafferty, the journalist and campaigner, put it to Fr Lagan.

He listened, silent as Zachary.

“Is it being live-streamed? For the people?” she demanded of Fr Lagan, then probably wishing he could be alone before another icon, that of Our Lady of Perpetual Succour. Maybe not.

Later he said of Nell, “I never met her before,” with understated regard. “She’s from around here,” he added.

A gentle slope from St Eugene’s (after a 6th century saint whose name in Irish means “born under the protection of the yew tree”) down William Street to where it meets Rossville Street brings you to that scene where over 44 years ago Bishop Daly sought help for the lifeless Jackie Duddy.

It is now marked by an Italian restaurant “Spaghetti Junction”, with tricolours, EU and Palestinian flags flapping vigorously in a hefty breeze. A street sign offer a “Guide to Free Derry, Battle of the Bogside August 12 th 1969”.

Further up is “Free Derry Corner”, now a main tourist attraction in the area. The banal but welcome normality of today. It was not so then.

Bishop Daly recalled that famous episode in his memoirs Mister, are you a priest? : “I noticed a young boy running beside me. I was running and he was running and, like me, looking back from time to time. He caught my attention because he was smiling or laughing...

“He seemed about 16 or 17. I did not see anything in his hands. I didn’t know his name then, but I later learned that his name was Jackie Duddy. When we reached the centre of the courtyard, I heard a shot and simultaneously this young boy, just beside me, gasped or groaned loudly...

“I took a handkerchief from my pocket and waved it for a few moments and then I got up in a crouched position and I went to the boy. I knelt beside him... I put my handkerchief inside the shirt to try and staunch the bleeding... I felt that I should administer the last rites to the boy and I anointed him. The gunfire started again around this time...

“I waved the handkerchief, which, by now, was heavily bloodstained. I went in front and the men behind me carried Jackie Duddy...

“A patrol of soldiers appeared in Waterloo Street and told us to clear off and I asked the people to calm down and kneel down and offer a prayer. The soldiers moved away. I remember one of the women screaming down the street after them shouting, ‘He’s only a child and you’ve killed him.’...

“here were dead and dying and wounded everywhere. I administered the last rites to many of them. I don’t know how many.”