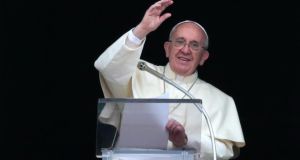 Pope Francis today denounced discrimination against Christians, including in countries where religious freedom is in theory guaranteed by law.

He delivered his traditional noon prayer and address to thousands of people in St Peter’s Square on the day the Roman Catholic Church commemorates St Stephen, its first martyr.

The 77-year-old Argentine pope asked the crowd for a moment of silent prayer for “Christians who are unjustly accused and are subjected to every type of violence”.

Pope Francis, celebrating his first Christmas season as pope, said “limitations and discrimination” against Christians was taking place not only in countries that do not grant full religious freedom but also where “on paper, freedom and human rights are protected”.

“This injustice should be denounced and eliminated...,” he said.

Pope Francis did not name any countries but the Vatican has long urged Saudi Arabia, the site of Islam’s holiest places, to lift a ban on Christians worshiping in public.

This year there have been a number of incidents of intolerance and attacks against minority Christians in Egypt, Indonesia, Iraq, Sudan, Nigeria and other countries where their rights are guaranteed by law.

Departing from his prepared text, the pope said he was sure that Christians suffering from either discrimination or violence were “more numerous today than in he early times of the Church”.

In the past, the Vatican has also expressed concern over what former Pope Benedict called “sophisticated forms of hostility” against Christians in rich countries, such as restricting use of religious symbols in public places.