Pope decrees women can be part of Holy Thursday feet-washing 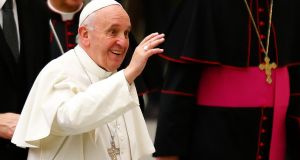 Pope Francis: “the people chosen for the washing of the feet in the liturgy of Holy Thursday may be selected from all the people of God, and not only men and boys”. Photograph: Tony Gentile/Reuters

Pope Francis has decreed that people chosen for the washing of feet at Holy Thursday ceremonies may from now on include women and girls.

The papal decree formalises what has already been occurring in some parishes. Holy Thursday takes place on March 24th this year. The ceremony commemorates the Last Supper before which Jesus washed the feet of his 12 apostles.

As with women priests, it had been argued in the Catholic Church that only men could have their feet washed at this Holy Thursday ceremony as the apostles were all male.

A Vatican statement yesterday said the pope wrote to Cardinal Robert Sarah, prefect of the Congregation for Divine Worship and the Discipline of the Sacraments on December 20th, saying “the people chosen for the washing of the feet in the liturgy of Holy Thursday may be selected from all the people of God, and not only men and boys”.

For some time he had been reflecting on the rite of the washing of the feet, he said, “with the intention of improving the way in which it is performed so that it might express more fully the meaning of Jesus’s gesture . . . His giving of Himself unto the end for the salvation of the world, His limitless charity.”

Five years ago, in February 2011, during a service “of lament and repentance”, Archbishop of Dublin Diarmuid Martin and Cardinal Archbishop of Boston Seán O’Malley washed the feet of a representative number of victims of clerical child sex abuse, including women.

Among the eight who had their feet washed then were Marie Collins, who was abused as a child by Fr Paul McGennis, and the late Christine Buckley, who was abused in Dublin’s Goldenbridge orphanage.