Pope asks forgiveness for ‘scandals’ in Vatican and Rome 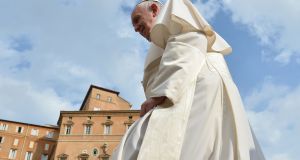 In a surprise move, Pope Francis opened his Wednesday public audience in St Peter’s Square by apologising to the 25,000 pilgrims for the “scandals...of recent times...in Rome and the Vatican”.

Before he began the public audience, he said he had something in particular he wanted to say. He then observed: “Jesus is a realist and he says that it is inevitable that there will be scandals but woe unto the person who causes scandal...Before I begin the catechesis (gospel), in the name of the Church, I want to ask your forgiveness for the scandals of recent times which have happened both in Rome and in the Vatican”.

He did not names people but the most logical interpretation of his words would appear to point to two “recent” events in Rome and the Vatican.

Firstly, there was the worldwide publicity generated by the “coming out” of Polish monsignor Krzysztof Charamsa, a “middle management” theologian at the Vatican’s Congregation For The Doctine of the Faith (CDF).

In a sensational news conference in a Rome restaurant right on the eve of the ongoing Synod of Bishops in the Vatican, Monsignor Charamsa confirmed an interview in that morning’s Corriere Della Sera in which he had not only declared himself to be gay but in which he had also suggested that many of those priests who work in the Holy See were also gay.

Furthermore, Monsignor Charamsa had appeared at the news conference along with his partner, Catalan Eduard Planas, posing for photographers in a series of poses which made it abundantly clear that their love was more than platonic.

The only other recent “incident” to which Pope Francis could have been referring relates to the Carmelite order in Rome.

Earlier this week, Rome media reported that a senior Carmelite had become named in a police investigation into gay prostitution in Rome’s Villa Borghese, the “central park” of the Eternal City.

Although the ongoing Synod has indicated clearly that there is vibrant debate between “conservatives” and “progressives”, as evidenced by the release this week of a letter to the Pope from a handful of senior Cardinals strongly opposed to change, neither that same debate nor the letter come under the “scandal” category.

Thus far, the Holy See press office has issued no further clarification on the Pope words of this morning.