Places of worship: ‘When we first arrived it was just an empty room’

Warehouses on industrial estates are used by Orthodox Christians, Muslim and Pentecostal groups 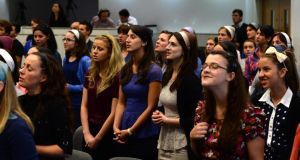 Changes in the practice of religion in Ireland can be witnessed in industrial estates dotted around the country.

Dozens of warehouses on obscure back roads in towns and cities of Ireland come alive at odd hours of the week with sounds of cars arriving, children playing, gospel music, the Islamic call to prayer or a multitude of voices praying in different languages.

These industrial units are often unidentifiable as places of worship from the outside. Occasionally there is a board on the outer wall with the name of the religious group using the premises. Inside, there is usually one large windowless room and smaller office-style spaces surrounding it.

The units vary in size. Some cater for congregations of up to 500. Others cater for smaller groups of maybe 50. The décor varies too, depending on the financial resources available. Money is used for paint, carpets, seating, altars, PA systems, toilets, kitchens, heating, electrical wiring and internal walls.

Warehouses are used by migrant Pentecostal and Muslim groups as well as sometimes by Orthodox Christians and other religious denominations. Renting them is affordable, particularly during the economic downturn, and objections by the public on the basis of planning or parking are rare.

Ten minutes drive away in Damastown there is a giant warehouse with a logo on the outside saying Betania. It’s a Romanian Pentecostal church. On a recent Sunday morning almost all the parking spaces are taken. Inside the plush and modern surroundings, there are hundreds of people singing and praying in Romanian.

Services broadcast
Pastor at Betania, Avraam Hudarau, says they broadcast their services live online and have hundreds of viewers around the world. He explains that it’s a way to connect with their families.

“This unit is very important to us – especially because of the car park which means we’re not obstructing other people. It’s a real blessing. When we arrived here first it was just an empty room. We put in everything ourselves. We have a five-year lease which ends in 2016.”

Down the road from Betania there is an industrial estate with a unit which is home to a branch of the Redeemed Christian Church of God, one of the biggest Pentecostal groups in Ireland. On a Sunday morning almost all the seats in the large room are taken by more than 100 women, men and children in colourful Sunday best, many in traditional Nigerian dress.

Pastor Timothy Segun Gbadebo says: “We would love to have a nicer or better place, a purpose built church” he says “but to be honest it’s a financial issue – a property like this is cheaper for us to run.”

The warehouses are viewed by migrant communities and religious groups as temporary measures. However, financial constraints mean most cannot afford to buy land or develop purpose-built places.

Andrea Cristea of the Dublin Intercity Faith Forum says that finding places of worship can be very difficult for migrant groups. “A consultation process is needed to look at this issue. There are no regulations at the moment. There are no policies. And there is very little support. It is a very challenging area.”