Migrant view: Is pope’s visit inappropriate or will it restore faith?

Poles, Filipinos, Brazilians and Argentinians share their opinions on papal trip to Ireland 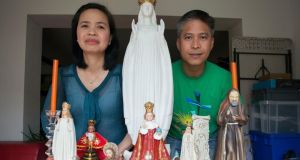 Lorna and Marlou Patindol, from the Philippines: hope the papal visit can draw people back into the Catholic Church. Photograph: Dave Meehan

When Lorna and Marlou Patindol heard Pope Francis would visit Dublin for the World Meeting of Families, they immediately booked a week’s holiday from work so they could volunteer at the event.

The couple, who work in Dublin’s Mater hospital, were brought up Catholic in the Philippines and became active members of the church when they moved to Ireland in the early 2000s.

The Patindols were surprised to discover after they moved here that so many Irish people no longer attend Mass, and hope the papal visit can draw some back into the church.

“There were a lot of things happening in Ireland which went against our beliefs – divorce, same-sex marriage and abortion,” says Lorna. “These are things that go totally against the teachings of the Catholic Church. ”

Like many Filipinos living in Ireland, Lorna and Marlou often turn to the church as a source of comfort in periods of difficulty.

“Our faith as Catholics has helped us a lot. Especially during challenging times we find comfort, consolation and happiness in our faith,” she says.

They are both aware of the church’s history regarding child abuse in Ireland but are eager to show their support for Catholicism so “it can regain the trust of the people again”.

“When I reflect on the history I feel very powerless. Maybe by leading by example we can show that it’s a good thing to go back and have faith in Jesus Christ.”

Kelli Monteiro, who moved to Dublin from Sao Paulo in 2009, views the papal visit slightly differently. Brought up Catholic, Monteiro feels deeply uncomfortable about the amount of money being spent on the pontiff’s visit (an estimated €32 million).

“Everything has to stop for him but at the same time there’s six kids sleeping in a Garda station. That money could be better spent. It wouldn’t solve the homelessness crisis but it would help.”

Until the pope apologises publicly for the church’s history of abuse in Ireland, Monteiro says she cannot view him as a “progressive” leader.

“The Catholic Church is such a big part of this country. Since I moved here everyone talks about the abuse and the laundries. He can’t just ignore these problems.”

Alicja Myszkowska, who moved to Ireland from Poland in 2004, is an active member of St Audoen’s Church in Dublin, which is home to the Polish chaplaincy. Like the Patindols, she hopes the pope’s visit will renew Irish people’s faith.

“It’s an important time for him to visit, especially when the family unit is being destroyed and people are living in partnership without getting married,” she says. “I have noticed that the parish in this country is forgetting to teach people about the laws of God. I can see the churches are becoming empty but hopefully people will find a way back.

“As a Catholic I know that the pope represents God on Earth. I hope that Pope Francis during his visit will leave peace and a sense of security in the hearts of the Irish people.”

Michal Szpak, who is also from Poland, says the pope’s visit is “inappropriate” and “bad timing”.

“For the head of the organisation that actively participated in the cover-up of so many scandals to come here just beggars belief,” he says. “I think his visit is totally inappropriate and I feel every Catholic should feel the same. The most appropriate reaction would be anger and disappointment.”

When Pope Francis became head of the Catholic Church in 2013, Szpak says he had high hopes for the man he considered a far “more reasonable pope” than his predecessor, Benedict XVI.

While the majority of Poles living in Ireland are Catholic – some 105,269 out of 122,515 identified as Catholic on the 2016 census form – Szpak says most younger Polish immigrants have moved away from the religious conservatism of their parents.

“We are looking towards the future rather than reinvigorating the past.”

Rodrigo Browne, who comes from Buenos Aires, the hometown of Jorge Mario Bergoglio (Pope Francis), says the recent vote against access to abortion in Argentina has altered his perception of the former archbishop of Buenos Aires, who he alleges was directly involved in encouraging senators to reject the law.

Browne has lived in Ireland since 2004 and voted in his first Irish referendum in May. “My first vote was repeal while Argentina’s senate has voted against women having a choice, sentencing thousands – especially the poor – to clandestine, unsafe and sometimes fatal interventions. This unfortunate chapter only shows how powerful the Catholic Church still is in Latin America.”

Browne says support for Pope Francis in Argentina is often divided by class.

“When he was elected the establishment and conservative society was very happy about it, they thought he would represent their interests,” he says. “But he took the opposite stance and, until very recently, progressive people in Argentina would relate to his attitude. Maybe this month that view has changed.”

Carla Perrotta, also from Argentina, says the pope’s efforts to raise awareness of poverty and poor housing conditions and attempts to create a dialogue between Christians, Muslims and Jews during his time as archbishop of Buenos Aires initially made him quite popular. However, Argentinian society has become deeply divided in their support for the man, she adds.

“There’s been a lot of political noise about him. For some he’d be seen to be too far left and against capitalism, and on the other side he’s strongly against homosexuality. I respect the man but it always depends on who you ask.”