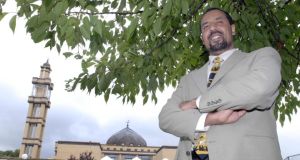 A file photograph of Dr Ali Selim at the Centre for Islamic Studies in Clonskeagh, Dublin. His book, Islam and Education in Ireland, is published next week. Photograph: Dave Meehan.

Muslims in Ireland are not interested in assimilation, according to a new book to be published next Thursday. Titled Islam and Education in Ireland, it is written by Dr Ali Selim of the Islamic Cultural Centre in Dublin’s Clonskeagh who is also a lecturer at Trinity College Dublin and the Mater Dei Institute.

He points out that “Muslims generally feel at home in Ireland. This could not have happened without giving Muslims the rights to which they, as citizens, are entitled.”

Where the wearing the hijab by Muslim girls in Irish schools is concerned he says this “shouldn’t cause any more debate than other religious symbols worn by either male or female students in Irish schools do.”

He notes how a wide range of religious symbols is worn by teachers in Irish schools such as “the pioneer badge and the sacred heart medal” or “a style of clothing assocaited with their religious order or ministry.”

However, school uniforms can present a problem for Muslim students, he says. Some “cause discomfort, while others are exclusivist and divisive. Some school uniforms have the crucifix symbol and others have religious images such as saints.” It means “people of other faiths find their children in a difficult situation.”

He continues: “school is a public place, where no one has the right to dictate or impose their views or beliefs on another.”

Despite which “Muslim children can feel alienated at school.”

He gives an example: “Every year from early November many activities revolve around Christmas. Classrooms are decorated and works of art are visible everywhere in schools. In addition, children spend a lot of time preparing for performances, such as carol services and plays, which are performed at school or in regional competitions.

“Various stories about Santa Claus are told, and the children talk to one another about their expectations. This is reiterated by the wider society, for example, cinema, pantomimes and shopping centres.”

He asks: “Can Muslim children be part of this fun and entertainment? Can this atmosphere be inclusive?”

Dr Selim suggests that “Muslim children can be included in the above-mentioned activities and others, provided that the songs, plays and works of art do not include any words or messages that conflict with Islamic beliefs and ethics.”

To encourage Muslims’ participation “a portion of these activities should be neutral and avoid religious references and connotations,” he suggests.

More generally,and where Muslim parents in particular are concerned, Dr Selim points out that “when it comes to shaking hands with members of the opposite sex, most Muslims are reluctant and many of them may refuse. This behaviour does not imply a lack of respect or that the other person is not clean.”

For some Muslims to do so would be “a clear breach Muslim teaching” or “is inconsistent with their culture.” Similarly, “Muslims do not believe in eye contact between members of the opposite sex.” This was “significant for teachers when dealing with Muslim parents.”

Also, and “from a Muslim perspective, members of the same sex can stand very close to each other” but members of the opposite sex are to be kept “at arm’s length. Apart from facial features, the entire body is still. Body language, in this case, is limited to facial features.” This too was “significant when dealing with Muslim parents,” he said.

When it came to Muslim children praying during the school day he says they should be facilitated by the school with “access to water facilities” as they must “perform Wudu, or ablution, prior to praying.” Then “ a clean, quiet room is needed as a prayer room.” This could be a temporary space in “any room or even the library,” he says.

The “only additional requirement” concerned toilets. He points out that “after using the bathroom, Muslims wash their private parts.If they are are provided with or allowed to take disposable bottles or cans to the toilet, this will suffice.”