Mother and baby homes inquiry seeks to hear from residents

Commission to focus on 14 homes, with report to be completed by 2018 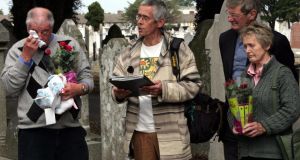 The Mother and Baby Homes Commission of Investigation would like to hear from anyone who was resident in, or who worked, in any of the 14 homes it is investigating, or relevant county homes subject to its inquiries, at any time from 1922 to 1998.

The commission also wants to hear from people who have personal knowledge about the homes, including family members of residents, regular visitors or those who supplied services to them.

The terms include an investigation into high mortality rates recorded in these institutions, the living conditions and social care arrangements in the homes and the exit arrangements made for single women and children on leaving.

The commission has a wide brief, including the power to investigate alleged forced and illegal adoptions from the homes and the relationships between the institutions and children’s homes, orphanages and adoption societies.

It can also investigate postmortem practices including the reporting of deaths, burial arrangements and the transfer of remains to educational institutions for anatomical examinations.

The committee’s proceedings are private, as will be the commission’s investigative hearings, though it has powers to hold the latter in public should that be deemed appropriate.

As with the Ryan Commission, which investigated reformatories, industrial schools and orphanages, the Mother and Baby Home Commission’s confidential committee was set up to provide a forum for people who had been resident in the homes or who worked in them and who wish to talk privately about their experiences.

The commission will investigate a representative sample of relevant county homes. This sample has yet to be selected. However records from the county homes “vary hugely” in quality and quantity, the spokeswoman said.

Among the 14 mother and baby homes being investigated are the Bethany Home and Ms Carr’s in Dublin, which were Protestant-run.

The commission is to report by 2018. It is chaired by Ms Justice Yvonne Murphy.

The commission does not have powers to help people who were adopted from mother and baby homes to trace their identity and birth relatives, nor has it any role in deciding on or awarding redress or compensation.

1 WHO warns of potential for ‘immediate second peak’ in Covid-19
2 Archaeologists are ‘quite sure’ they have found Red Hugh O’Donnell’s burial place
3 Coronavirus: What will reopen in Ireland’s phases to ease restrictions and what are the dates?
4 Coronavirus: No new Covid-19 deaths reported in State for first time since March
5 Unconvincing account may take some heat out of Dominic Cummings controversy
Real news has value SUBSCRIBE