Majority of 19 new cardinals from outside Europe 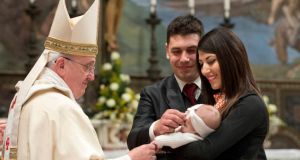 Pope Francis baptises one of 32 babies during a mass in the Sistine Chapel at the Vatican today. The pope today elevated to the rank of cardinal 19 prelates from 12 different nations including ten from outside Europe. Photograph: Osservatore Romano/Handout via Reuters

Pope Francis continued with his non-European “imprint” on the Catholic Church when he named his first batch of cardinals today, with ten of the 16 elector cardinals coming from outside Europe.

Two of the new cardinals come from Africa, two from Asia, two from Central America, one from North America and three from Latin America.

As is customary, the Pope himself announced the names of the new cardinals during his Sunday Angelus address in St Peter’s Square. Argentine Pope Francis, the pontiff who has described himself as coming “from the ends of the world”, has made no secret of his belief that he believes that the Catholic Church is too “euro-centric”. Even including today’s appointments, the College of Cardinal Electors (those under 80) is still more than 50 per cent European. More than half the world’s Catholics live in Latin America alone.

Not surprisingly then, the largest contingent of new, non-European Cardinals comes from Latin America with the red hat being bestowed on the Pope’s successor in Buenos Aires, Archbishop Mauro Aurelio Poli, on the Archbishop of Rio de Janeiro, Orani Joao Tempesta and on the Archbishop of Santiago, Chile, Riccardo Ezzati Andrello. The remaining seven non-Europeans come from Burkina Faso, Ivory Coast, Nicaragua, Haiti, the Philippines, South Korea and Canada.

Underlining the non-European emphasis of these appointments is the fact that four of the six Europeans were all “automatic” appointments traditionally conferred on the heads of important Vatican dicasteries, such as the Pope’s “prime minister” or secretary of state, Italian Archbishop Pietro Parolin.

In that same context, Francis also nominated Italian Archbishop Lorenzo Baldiserri, the secretary general of the Synod of Bishops. By making him a cardinal, he lends weight to the Vatican’s Synod, the closest the Catholic Church ever comes to a parliament.

The Synod is scheduled to bring together bishops, priests and lay people from all over the world twice in the next two years to discuss the role of the family.

All in all, Pope Francis has today named 19 new Cardinals. With the numbers of the Cardinal Electors down to 104, he needed to name at least 16 new electors to bring the number up to the required 120. In fact, he named 16 new electors as well as three over-80 Cardinals.

Much as expected, the heavy non-European bias appears to have worked against Dr Diarmuid Martin, the Archbishop of Dublin.

Many Vatican insiders had argued that it was highly unlikely that Francis would appoint a new Irish Cardinal, given that Ireland already has two Cardinals; Archbishop of Armagh, Sean Brady, and the Archbishop Emeritus of Dublin, Desmond Connell.