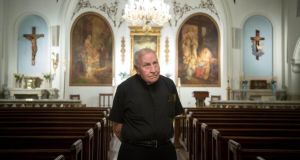 Limerick-born Rev Bartholomew Daly has been Our Lady of Peace’s administrator since 1993. Photograph: Michael Nagle

The choir strikes up a joyous hymn as Fr Bartholomew Daly makes his way down the aisle of the Church of Our Lady of Peace in Manhattan.

As he approaches the altar, the 79-year-old priest smiles and waves at members of the congregation. But despite his efforts to keep the mood positive, many of the parishioners are already in tears.

On Friday, as part of a major restructuring effort in the Archdiocese of New York, the 97-year-old church is scheduled to close. Today’s Mass may be the last one celebrated here.

“The prospect of losing a church as vibrant as this one has been very hard on everyone,” says the Limerick-born priest, who has been Our Lady of Peace’s administrator since 1993. While he accepts the archbishop’s decision, his community on the Upper East Side, five blocks from Central Park, have vowed to fight to the bitter end to keep the church open.

In 2011, when the Archdiocese of New York initiated its restructuring effort – dubbed Making All Things New – it was billed as the means to best serve the evolving needs of its congregations. But three years later, when the decision was announced to close more than 30 churches and merge more than 100 parishes, including the financially robust Our Lady of Peace, many of its parishioners claim that rather than having their needs served they are being sold out.

The church was founded in 1918 by a group of Irish and Italian immigrants who cobbled together enough money to buy the building. A plaque located near the church entrance lists the name of every donor and their contribution amount.

“The church was founded in a spirit of openness and inclusion,” says Regina Scudellari, whose great-grandfather, Innocenzo Scudellari, was one of the original donors. “We can thank Fr Daly for keeping that spirit alive.”

Fr Daly says making the church a place where everyone feels welcome has been his top priority. The doors are open from 7am until 9pm and the church has long been seen as a place of refuge for many of the city’s homeless.

“We wouldn’t dream of turning anyone away,” he says. But now his own bags are packed and he is prepared for the fact that the church may soon be closed to him.

“There may be other reasons, but it’s hard not to think that the real estate value of these buildings [the church and the rectory] doesn’t have something to do with it,” says Ms Scudellari. In the recent past, selling churches to convert to apartments has become something of a trend in New York. In the Upper East Side, residential buildings are selling for tens of millions of dollars.

“It is a simple fact that there were more parishes than were needed,” he said. “The Archdiocese of New York was still operating on a model that was put in place in the late 19th and 20th centuries. It was time to move the church into the 21st century.”

In this case, the church’s history makes its future prospects so painful for the community.

The parishioners have planned an all-night prayer vigil for Thursday in a last-ditch effort to be granted a reprieve. “We know it’s a long shot,” says Silmara Roman, who was married in the church 15 years ago and had both her children baptised there. “But miracles can happen.”

However, she knows the more likely outcome is that the church will be shut down as planned on Friday.

“It won’t be me who turns the key in the lock,” Fr Daly says as he makes his way down the aisle after the final service. “I’ll leave that to someone else.”