Serving others for years, some nuns never provided for themselves 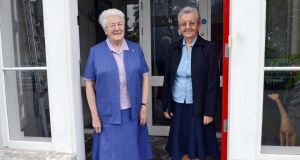 Sr Conchita McDonnell and Sr Monica Devine. They have spent their lives educating the poorest of women. Photograph: Eric Luke / The Irish Times

Idealism, they say, dies with age. This was probably how that elderly former French prime minister Aristide Briand could say the person who wasn’t a socialist at 20 had no heart, but one who remained a socialist at 40 had no head.

It is rare to meet people in the seventh decade of life who remain undefeated by experience and still live close to the flame that inspired their youth. I met such a blessed trinity this week, three nuns in pursuit of a home.

It is a cliche to say that many of Ireland’s best vocations to the religious life went on the missions; however, time spent in the company of Sr Monica Devine, Sr Conchita McDonnell and Sr Mary Mullin would reinforce the view.

All are “Killeshandra nuns”, or Missionary Sisters of the Holy Rosary, once based at Killeshandra, Co Cavan. They were founded by Holy Ghost bishop Joseph Shanahan in 1924, when he realised that missionary efforts in Nigeria ignored women. The mission of the Killeshandra nuns is to empower women.

Srs Devine, McDonnell and Mullin have spent their adult lives educating the poorest of women, few of them Christian, mainly in Africa. Sr Monica, from Frenchpark in Roscommon, has spent most of her life with the Tiv people of Nigeria, teaching them science and maths. They were her people. “We were told, wherever you’re going, these are your people,” she said. Some have died with the people and those that did were buried where they died.

It meant that Sr Monica and Sr Conchita, from Ballina, Co Mayo, were at war once upon a time. Not an unusual situation where Roscommon and Mayo people are concerned, though usually it’s about football.

Sr Conchita was a teacher of English, history and religion with the Igbo people of southeastern Nigeria, who were farmers and traders, while Sr Monica was with the Tiv, mainly farmers, in the middle of Nigeria. The two groups went to war with each other.

Afterwards, Sr Monica was approached by a Tiv man who said he converted to Catholicism because “you knew trouble was coming and you stayed with us because of the God you believe in”.

Sr Conchita, on the other hand, was “surrounded by the local chief and the elders of our little village who assured me that I would be protected as one of their own”.

Then there is Sr Mary from Tuam in Galway. She is back from Liberia on a break since June and cannot return because of the Ebola epidemic there. It’s where she wants to be. She has been working with people displaced by war, mostly women who have suffered rape, gang rape and intense trauma.

These nuns have had tropical diseases, such as malaria, onchocerciasis and river blindness, and some have suffered Lassa fever. But still they go back. “I was only at the brink of death once,” remarked Sr Monica casually.

All three sisters are good-humoured, practical women with not a hint of unctuous piety between them. Still, they’ve been caught out.

“Ours is a pioneering charism,” explained Sr Conchita. “We were always dispossessing ourselves, working ourselves out of a job, as we were told to do when novices.”

It meant whatever resources they raised were ploughed into the people they were with – into their education, health care, human rights programmes. A lot of their work too has been about looking after refugees from the interminable wars of Africa.

They’ve been spectacularly successful at dispossessing themselves. So much so that it was only 10 years ago when it dawned on them that many of their number were getting old and had no homes to go to.

Other religious congregations in Ireland were kind and assisted them with temporary accommodation, often in older buildings with stairs which proved too much for some more elderly Killeshandra nuns. Approximately 170 of them are now in their 70s and 80s and return from the mission fields only when age and health compels it.

They became involved in a social housing scheme at their convent in Dublin’s Artane about eight years ago, but it fell through with the Celtic Tiger. Such was the need they went ahead anyhow and built a retirement home at the convent.

The cost was more than €3 million and has to be paid for.

Sr Monica and Sr Conchita were delegated to clear the debt, “the hardest job yet”, said Sr Conchita. The Artane home will be opened on Thursday by former taoiseach John Bruton, who has a relative among the Killeshandra nuns.

President Michael D Higgins’s wife, Sabina, is patron of their “friends” fund-raising committee; her cousins Sr Goretti and Sr Breda are Killeshandra nuns. Also attending on Thursday will be former Fianna Fáil minister Michael Woods, who also has a relative in the congregation.

Anyone wishing to contribute to the retirement home fund may do so by emailing devinemonica@gmail.com or conchitamcdonnell@gmail or via the website knuns.org