Prayer service for woman and children who died in Clondalkin fire

‘The families are just supporting each other. You can’t believe [this tragedy] is real’ 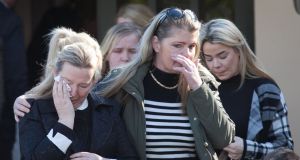 Mourners at the prayer service in Bray for Annmarie, Paris, AJ, Holly and Jordan O’Brien, who died in the Clondalkin fire. Photograph: Gareth Chaney Collins 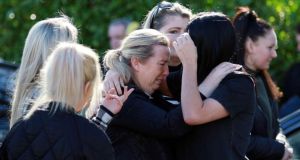 Mourners at the prayer service in Bray for Annmarie, Paris, AJ, Holly and Jordan O’Brien, who died in the Clondalkin fire. Photograph: Nick Bradshaw

A backdrop of children’s balloons and five coffins side-by-side underscored the sense of unreality at the prayer service on Sunday for those who died in an apartment fire in Clondalkin, Dublin last week.

About 500 people attended the service at Colliers funeral home in Bray, Co Wicklow for Annmarie O’Brien (27), her daughter Paris (2), unborn baby AJ, and for Holly (3) and Jordan McGinn (4). They died in a fire at an apartment in a women’s refuge early last Wednesday morning.

Annmarie’s cousin and mother of Holly and Jordan, Brigid “Biddy” O’Brien, remains in a critical condition in St James’s hospital, having suffered serious burns. She had been visiting her cousin in Clondalkin with her children that night.

Among the mourners were John Lynch, whose sister Sylvia Connors (30), brothers Willy (25) and Jimmy Lynch (39), brother-in-law Thomas Connors (27), as well as nieces Jodie (9), Kelsey (4), Mary (5 months), and nephews Jim (5) and Christy (2) died in a fire in a Traveller site in Carrickmines, Dublin in October 2015, and Harry Gilbert whose daughter Tara (27), who was pregnant, and grandchildren Jodie and Kelsey died in the same tragedy. Tara had been engaged to Willy Lynch.

This tragedy had “brought it all back again”, said Mr Gilbert. His daughter Tara had been “close friends” with both Annmarie and Biddy, the families having grown up in the Fassaroe area of Bray. While Annmarie moved to Clondalkin, Biddy and her husband lived with their children in Aughmore Lane housing scheme in Shankill.

Three of coffins were open, with just Holly’s and AJ’s closed. Fr O’Driscoll, speaking after the service, said words were “so inadequate”.

Jim O’Brien, a relative of the family and manager of the Bray Traveller Community Development Group, said the families were “just trying to prepare themselves” for the funeral on Monday.

“It’s going to be a hard-hitting day, especially when you see the small coffins going down. It’s very, very tough. We just want the families to know that we’re actually there and we’re supporting them as best we can. Shankill, being the small community that it is, there is a lot of support from both sides of the community - Traveller and settled.”

The funeral Mass will take place in St Anne’s Church, Shankill, on Monday at 10am.