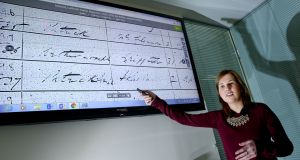 Ten million historic Irish Catholic records dating from the Cromwellian era to the first World War, including baptismal, marriage and death records, will be available online free of charge throughout March.

In English or Latin, the records are a mine of information for historians and those tracing family trees, such as names, dates, family relationships, maiden names for mothers and wives, even the names of godparents and witnesses.

A translation of frequently used Latin terms – which number, for example, the baptismal certificate of James Joyce – are translated on ancestry.ie.

Indexed from digital images created by the National Library of Ireland, the Catholic Parish Registers 1655-1915 holds 373,000 images and files from more than 1,000 parishes across the island and in excess of 3,500 registers.

Handwritten information from the original records has been transcribed so each name can be easily searched and accessed.

“It makes searching so much easier,” said Rhona Murray, family historian at ancestry. “Previously you would need to browse them image by image which can be akin to finding a needle in a haystack. Now it is possible to search for a name and have the results presented within seconds.”

In all, ancestry.ie now offers access to more than 55 million Irish records – making it a substantial resource globally for those tracing their Irish roots, she added.

Joyce’s name is recorded in Latin as Jacobus Augustinus Joyce, who was baptised on February 5th, 1882.

It also includes the baptismal record of Sinn Féin founder, and president of Dáil Éireann until August 1922, Arthur Griffith. Also included is James Hoban who designed the White House in Washington.

He was baptised at Callan, Co Kilkenny, on April 18th, 1755. Before now the year of his birth was a cause for speculation as a consequence of his obituary. But this has finally been established with the discovery of the original baptismal record.

“It is the single most important collection for tracing Roman Catholic ancestors in Ireland from the 17th to the early 20th centuries,” said Ms Murray.

Ancestry is the world’s largest online family history resource, holding17 billion records available to more than 2.2 million paying subscribers. It has offices in six countries and employs approximately 70 staff at its Irish office in Dublin.

However, the free access is limited to March only. From April 1st the Ireland, Catholic Parish Registers 1655-1915 collection can be accessed on a subscription basis only. Rates are from €18 a month.