Faith of others not something for Christians to judge, says Archbishop

Hundreds join Way of the Cross procession through Phoenix Park 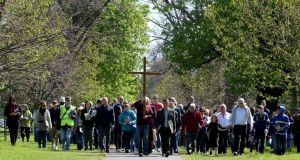 
Faith is not an intellectual exercise. “Christian faith is a faith in a God who loves and seeks from us a response in love,” Archbishop Diarmuid Martin said in the Phoenix Park yesterday.

Traffic passed, sloth-like. A long queue had formed outside the zoo, mostly young families, while nearby young men kicked a ball.

“In Italian there is a lovely phrase, povero Cristo , a poor unfortunate Jesus Christ, which refers to someone who appears to have lost all semblance of their dignity and ends up broken in their own lives,” he told the hundreds of people there gathered.


Procession
They were en route from the Wellington monument on the annual Good Friday ‘Way of the Cross’ procession. Organised by the Communion and Liberation movement, it continued to the papal cross.

“The Christian should not think that he or she can judge the faith of others and judge whose faith is better than the other,” the Archbishop said in brilliant sunshine.

Some trees remained bare, deep in winter slumber. Others had answered spring’s call and showed off a light green livery.


Povero Cristo
“We too must look on every person we meet, especially those who are broken or indeed have fallen, as a povero Cristo , one who, despite how he or she appears according to our categories, is still a person created in God’s image and loved by Jesus,” he said.

Two small children, a boy and girl, collected sticks which they piled in a bundle. It soon looked like a nest.

“Before we decide to judge others according to our categories, stop for a moment and remember the words of Pope Francis: ‘Who am I to judge?’,” the Archbishop suggested.

Later, last evening, he and the Church of Ireland Archbishop Most Rev Michael Jackson led hundreds through the streets of Dublin behind the ecumenical Taizé cross, in their third Ecumenical Walk of Witness. After prayers they journeyed from Christ Church Cathedral to the Pro-Cathedral, where all participated in a Taizé prayer service.