Ecumenical history made in Dublin 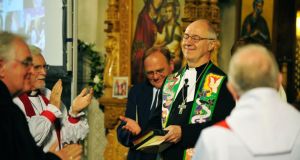 Rev Peter D Murray pictured after being elelcted and installed as President of the Methodist Church in Ireland at a ceremony in Christ Church Leeson Park, Dublin tonight. Photograph: Aidan Crawley/The Irish Times

History was made in Dublin tonight when the two Church of Ireland archbishops took part in the installation of the new Methodist President Rev Peter D Murray.

The ceremony was also attended by Rev Murray’s predecessor, Rev Dr Heather Morris, who was the first woman to lead a church in Ireland. Her one-year term of office ended tonight with the installation of Rev Murray and the opening of the 2014 Methodist Conference.

The participation of the Church of Ireland archbishops and bishop in the ceremony follows agreement by both churches that, while they remain distinct, interchangeability of their ministries can now take place. An ordained minister of either may now come under the discipline and oversight of the other.

The historic decision was approved by the required two-thirds majority of Church of Ireland General Synod. Equivalent legislation had already been approved by the Methodist Church in Ireland.

Both churches also now agree that a Methodist president, who is elected and holds office for a year, is recognised as an “episcopal minister”, as are all previous holders of the office.

Among the attendance at the installation tonight were Col Brendan McAndrew, aide-de-camp to President Michael D Higgins, the Catholic Coadjutor Archbishop of Armagh Eamon Martin and the General Secretary of the Presbyterian Church in Ireland, Rev Dr Donald Watts.

There are an estimated 50,000 Methodists on the island of Ireland, about 38,000 of whom are in Northern Ireland.