‘When I got there this morning the sky was completely clear... all I could hear was the little waves rushing up on to the beach’ 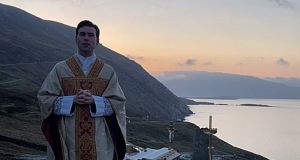 An early morning Mass to celebrate Easter Sunday has been held at a Mass rock overlooking picturesque Keem Bay on Achill Island.

Fr Gerard Quirke of the Achill parish celebrated 7am Mass at the site which was used during the era of penal laws when Catholics endured restrictions on their civil liberties.

It was the first time the religious service has been celebrated at this particular site in living memory.

“There’s a little house in front of the Mass rock, the man who lives in that house is in his 80s. His family bought that house in 1945 [and] it’s the first time he’s ever seen a Mass being celebrated at this Mass rock,” he said.

It was a service with a difference, he added: “We couldn’t say Mass in the church, so it has also been streamed online.”

The mass rock is located in an area exposed to the elements so it was touch and go whether Fr Quirke would be able to go ahead with the ceremony as planned.

“When I got there this morning the sky was completely clear, it was extraordinary. All I could hear was the little waves rushing up on to the beach. It was so calm and peaceful; it was really magical and transformative.”

He added that on Easter Sunday Catholics celebrate Jesus emerging from his tomb alive. “Roman soldiers covered Jesus’s tomb with a stone; we are experiencing that at the moment, our churches are closed. But Christ was not bound by the stone or the tomb. Whenever we pray, whenever we enter into our devotions, watch Mass online, Christ is there. He’s not bound by stone and pillars. The stone will be moved away for us too.”

The Mass was videoed by Sean Molloy of Blue Flag Media and can be viewed on Facebook.