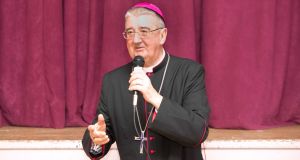 Preparations for the Easter Rising parade will make it very difficult to celebrate Mass in the Pro-Cathedral on Easter Sunday, the Archbishop of Dublin Dr Diarmuid Martin has warned.

There will be no place for Mass goers to park in the city centre on Sunday, March 27th and buses will not be allowed through the centre of the city.

Speaking to the Marian Finucane Show on RTÉ radio, Archbishop Martin said it was important parishioners could make it to the church to celebrate Mass on Easter Sunday.

“ Christians have a right to celebrate Easter. It is sad that type of thing is going to happen.”

He stated that many of the rebels went to Mass on Easter Sunday in the Pro-Cathedral, Marlborough Street, and others attended confession in the church on Easter Monday before proceeding to the GPO.

He also stated that the portrayal of his predecessor in 1916 Archbishop William Walsh in the RTÉ drama series Rebellion “flies totally against the records we have” about his conduct during the Easter Rising.

In Rebellion, Archbishop Walsh is shown as having condemned the Rising, but Archbishop Martin pointed out that he made no such statement.

The Archbishop was seriously ill at the time and only issued one statement during the Rising asking the people to keep off the streets, Dr Martin pointed out.

Archbishop Martin said many of the leaders of the Rising were religious, most notably Patrick Pearse and Joseph Mary Plunkett. “That dimension is being clinically wiped out into a very secular understanding of what the Rising was about.”