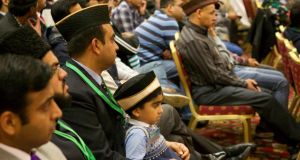 An Irish Imam has told of being verbally abused on the street and having a bottle thrown at his head because of negative perceptions of Islam in Ireland.

Speaking ahead of his address to the Ahmadiyya Muslim Association’s national convention in Maynooth on Sunday, Waterford native Ibrahim Noonan – who was the first Irish man to become an Imam – said radical Muslim extremism is a problem in Ireland, but one that started more than a decade ago, rather than as a response to recent acts of terror.

“That’s the first sign I saw, in 2003 and 2004, that even in Ireland they are trying to radicalise Muslims here,” said the head of the Ahmadiyya sect of Islam in Ireland.

“There is a small minority who definitely will like what they see in Isis, they might find that they have a narrative for their case. That narrative has nothing to do with the teachings of Islam.

“I know Imams here who will talk about peace, but they do hold very extremist views and they will not share that with the media. All these Imams have to choose either the path of peace in totality or walk off with their twisted version of Islam,” he added.

Followers of the Ahmaddiya sect comprise only 450 out of a total Muslim population of 60,000 in Ireland, but he says general Islamophobia among the indigenous population is growing in light of recent high-profile atrocities carried out in Australia, Paris and Tunisia.

“People who I’ve met have said clearly to me ‘we are afraid of you, we are scared of Islam’. It is because what they’re watching on TV and what they’re reading in the media.

“Some are very vocal and very upfront. I’ve had bottles thrown at me, I’ve had abuse. I was walking into the mosque . . . and whatever way I moved slightly a bottle came just past my head and smashed off a door,” said Imam Noonan, referring to the actions of a young Galway man who later apologised.

He was joined by one of London’s preeminent Ahmaddiya clerics, Imam Naseem Ahmed Bajwa from the Morden mosque, who echoed the sentiment that violence contravenes the core message of Islam.

“When they (the media) use the term Islamic State again and again, we always wonder ‘how can they say this is an Islamic State’? Islam is peace, and what they are doing is totally against peace,” he said.

Both clerics said unbalanced media portrayals of the Muslim world have contributed to the increasing negative sentiment.

Founded in India/modern-day Pakistan in 1889, the Ahmaddiya branch of Islam has tens of millions of followers worldwide, but worshippers face discrimination and persecution in Pakistan which does not allow them to practice their faith openly.