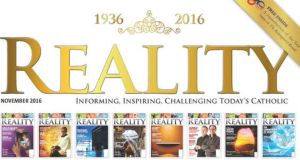 One of Ireland’s best-known and respected religious magazines celebrates its 80th anniversary this month.

Published by the Catholic Redemptorist congregation, Reality first appeared in November 1936 as “The Redemptorist Record”.

It described its mission as being to “inform, inspire, and challenge today’s Catholic”.

In the intervening years, it has followed that mission with such integrity and consistency it was inevitable it would fall foul of the Vatican, as has happened in recent times.

In 2012, Fr Tony Flannery was silenced by the Congregation for the Doctrine of the Faith for his article on the priesthood that was published in Reality in 2010.

The magazine’s then editor, Fr Gerard Moloney, was also censured over the article.

Commenting on Reality’s 80 years, current editor Fr Brendan McConvery said: “We have had a fantastic, if at times colourful, history.”

He noted the magazine’s evolution from its hardline position on sexual matters in the 1950s to a publication that by the mid-1960s had become so “dangerous” that then archbishop of Dublin John Charles McQuaid felt it required three archdiocesan-appointed censors.

Fr McConvery said the magazine was particularly proud of the part it played in bringing the vision and promise of Vatican II to the Irish faithful, and of being a facility which allowed people to reflect on the myriad issues facing the church at home and abroad - uncomfortable though some of these issues might be.

However, he lamented the recent closures of several religious publications and the pressures facing the religious press in the 21st-century.

Fr McConvery stressed the need for a strong and diverse religious media in Ireland.

“It is abundantly clear that if ever we needed a robust religious press in Ireland, we need it now,” he said.

“We need a Catholic media to champion the Catholic perspective and to which Catholics can turn for support, information and guidance.

“Reality magazine and [its publishers] Redemptorist Communications hope to be able to fulfil this role for many years to come,” he said.

Cattle egret pays rare visit to Ireland 17:56
Protest at Áras an Uachtaráin over mother and baby homes Bill 17:46
Water on moon may be more common than previously thought 16:53
Pledge to ramp up processing of applications from undocumented migrants 16:20
Three relatives dead after apparent murder-suicide in Kanturk, Co Cork 16:05