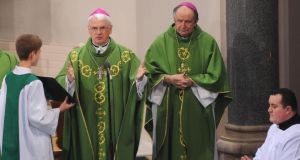 A self-appointed review of its own child safeguarding practices by the Catholic diocese of Down and Connor has been greeted with surprise by the Church’s own child protection watchdog, its National Board for Safeguarding Children (NBSC).

The NBSC, which is is funded by the Irish Catholic bishops, the Conference of Religious of Ireland and the Irish Missionary Union, has conducted its own review of child protection practices in the diocese which is due for publication shortly.

The Down and Connor review was commissioned by its Bishop Noel Treanor in December 2012 and presented to him last July. Conducted by Dr John Devaney of Queen’s University Belfast, and is broadly positive in its conclusions.

In the last of his 10 recommendations in the review Dr Devaney said that “both this report and the earlier audit of cases should be shared in full by Bishop Treanor with the National Board (NBSC).”

Speaking to The Irish Times last Friday John Morgan, chairman of the NBSC, expressed surprise at the Down and Connor review of which he had been “unaware” and had “no knowledge.”

He went on to explain that the fourth tranche of NBSC reviews would be published “in the early future.” It would include their review of Down and Connor as well as seven other dioceses and one religious congregation. It will be the largest tranche of such reviews published to date by the NBSC.

Included will be reviews of the archdiocese of Cashel and Emly, Kerry diocese, and the review of St Patrick’s Missionary Society, based at Kiltegan Co Wicklow, which was expected to be published last April.

In September of 2012 it emerged that an internal inquiry, headed by former Supreme Court judge Mrs Justice Catherine McGuinness, cleared recently retired NBSC chief executive Ian Elliott of allegations by Bishop Treanor that he had been spinning against church leadership. Bishop Treanor apologised.

Speaking to The Irish Times a spokesman for Down and Connor diocese said their review was part of “ongoing monitoring” intended “to strengthen the ongoing process” where child protection in the diocese was concerned. He pointed out that an earlier review of practices there, and involving Dr Devaney, had been conduced in April 2011 and was published on its website in October 2011.