Women in diocese had been ‘hurt and very disappointed’ 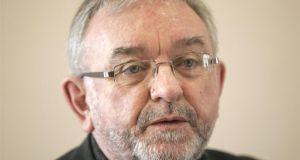 Bishop of Killaloe Kieran O’Reilly: has decided to “not now proceed with the introduction of the permanent diaconate at this time in the diocese”. Photographer: Dara Mac Dónaill

In a pastoral letter last month, the bishop invited men to apply for posts as permanent deacons in Killaloe, Co Clare.

The move sparked protests from local women who are active in parishes. Posters appeared in churches calling for opposition to the male-only diaconate and a protest meeting was due to take place at the Clare Inn in Dromoland last night.

In a note read at Masses in Killaloe over the weekend, Bishop O’Reilly said he had “listened very carefully to the observations and concerns raised”. He had decided to “not now proceed with the introduction of the permanent diaconate at this time in the diocese”.

He said he felt that “the level of engagement shown by the recent dialogue has brought to the surface a sign of the energy and commitment of many people in our church. I encourage this dialogue to continue.”

Last night Kathleen McDonnell from Cross, Co Clare, said she was “very pleased” at the bishop’s decision. She and a group of women opposed to the male-only permanent diaconate hoped to meet Bishop O’Reilly on the matter.

She said women in Killaloe “who do the majority of work in the parishes” had been “hurt and greatly disappointed” by Bishop O’Reilly’s male-only invitation last month.

The first permanent deacons of recent times in Ireland were ordained at Dublin’s Pro Cathedral in June 2012 by Archbishop Diarmuid Martin. He raised eight men to the state.

About 20 more men have since been ordained permanent deacons across Ireland.

In October 2000, the Irish bishops sought Vatican approval for the introduction of a permanent diaconate in Ireland. This was granted in July 2005.