Archbishop says supporting Mayo in All-Ireland finals ‘our Via Dolorosa’ 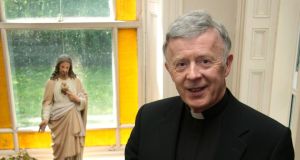 Archbishop of Tuam Michael Neary will be supporting Mayo on Sunday.

Castlebar man and Catholic Archbishop of Tuam Michael Neary described supporting Mayo in All-Ireland finals as “our Via Dolorosa.” It refers to the route Christ took on his way to Calvary.

This year the Archbishop feels “it’s all to play for”.

Mayo “will probably be underdogs, which is a good thing. But Dublin are very powerful and have a great depth of talent on the bench.”

In 1951, when Mayo last won an All Ireland senior football title, he was “too young to appreaciate what winning an All-Ireland meant. I was then in the baby room at St Patrick’s national school (in Castlebar). Éamonn Mongey lived up the road from me.”

Along with then captain Seán Flanagan, Mongey, who died in 2007, has been described as the ‘brains’ behind that 1951 team.

Reflecting on those days, Archbishop Neary said: “We were raised by Micheál O’Hehir in so many ways before TV. He created the atmosphere and would send messages on All-Ireland final Sunday”.

One year such greetings were sent “to Fr Peter Quinn in the Philippines. He was from North Mayo. It went through Radio Brasilia (in South America).”

Emigration
Mayo “has suffered so much from emigration, but some will come home” for Sunday while “many others will watch it in America and Australia at all hours of the day and night.”

And people shouldn’t forget “we have a great minor team playing on Sunday as well,” he said.

The “clear run in Connacht” this year was a worry, so “it was good to see the game against Tyrone”.

It showed this Mayo team “has a determined group of players who will cope with adversity. They won’t throw in the towel. They are capable of displaying what’s best in the game; high fielding, intelligent passing of the ball, great defensive play, and taking long-range points.”

Purist style
Mayo “has been criticised for a purist style. But you can’t fault that.” One man he felt epitomised “the bottle and spirit of this team. The way (captain) Andy Moran came back from injury was symptomatic of that and even if he doesn’t start on Sunday he’ll be a great, rousing sub to bring on.”

Winning the All-Ireland would be “a great lift to Mayo, especially in this Year of the Gathering. Mayo people are so proud of parish and county.”

Care homes and Covid: ‘The first line of defence is going to be a wall of vaccinated staff’ 19:55
Man (21) sentenced to community service over crash that killed friend 19:36
Coveney insists Irish fishing industry central to Brexit talks 19:19
Family issue appeal over disappearance of Mayo woman 20 years ago 18:56
Banks warn customers about Brexit disruption to direct debits 18:43