Analysis: Synod document not a setback for Pope Francis 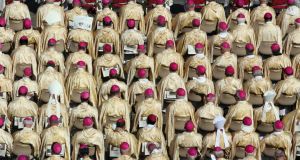 Cardinals and bishops attend the Mass for the closing of Extraordinary Synod held by Pope Francis at St Peter’s Square in the Vatican City. Photograph: Franco Origlia/Getty Images

Those who feel they’ve been consigned to the margins once again by a Catholic Church statement should put the brakes on their despair for the moment.

The concluding Relatio Synodi document of the extraordinary Synod of bishops on the family, published yesterday, is not the last word.

Copies will be sent to Catholic bishops’ conferences worldwide for further reflection before a Synod of Bishops proper next year.

It takes place from October 4th to October 21st and will be a much larger synod than the one concluded, which had 183 voting participants

Next year’s synod will have 250 and it will be followed by an apostolic exhortation from Pope Francis, taking up its themes and deepening them.

So, as the song says, “the road is long, with many a winding turn…”

That said, the Catholic Church does not do winding turns.

Still, as Archbishop of Dublin Diarmuid Martin put it yesterday: “There can be a development of doctrine in the sense that we can understand the same doctrine in a different way, but a change whereby, overnight, you say that what was wrong is now right, that is just not on the cards.”

The very fact that last Monday a document from a synod of Catholic bishops could offer such hope to gay people, the unhappily married and others, is an advance, regardless of how constricted the language became five days later.

Let’s remember that interim document spoke of gay people as having “gifts and qualities to offer to the Christian community” and asked “are we capable of welcoming these people?”

Where the unhappily married were concerned, it spoke of “the necessity to make the recognition of cases of nullity more accessible and flexible”, while the debate on admitting divorced remarried Catholics to communion goes on.

More generally Monday’s document said: “The Church turns respectfully to those who participate in her life in an incomplete and imperfect way, appreciating the positive values they contain rather than their limitations and shortcomings”.

It would be felt that Monday’s document more accurately reflects the thinking of Pope Francis and that what was published last night was a setback for him.

Rather, it is evidence of his intention to give fair hearing to sincere views as this process goes on.

And while many who believe Pope Francis is impelled to embrace all, chaff and wheat, leaving it to God to judge, it would be a mistake for them to see last night’s document as a block to that ambition or that he is naïve to attempt it.

He knows what he is up against. In his final address to the synod yesterday he warned against those with “a temptation to hostile inflexibility,” such as “is the temptation of the zealous, of the scrupulous, of the solicitous and of the so-called - today - ‘traditionalists’ and also of the intellectuals”.

He also cautioned against the “the temptation to a destructive tendency to goodness, that ….binds the wounds without first curing them and treating them” and against “the temptation of the ‘do-gooders,’ of the fearful, and also of the so-called ‘progressives and liberals’.”

He made clear over the weekend where he is coming from.

At the beatification of Pope Paul VI he quoted approvingly from that pope: “by carefully surveying the signs of the times, we are making every effort to adapt ways and methods… to the growing needs of our time and the changing conditions of society.”

The journey goes on.