All churches in Ireland in need of ‘reality check’

The family won the same-sex marriage referendum for gay people 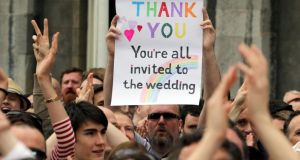 A supporter holds a sign reading ‘Thank You - You’re All Invited to the Wedding’ as he celebrates outside Dublin Castle following the result of the same-sex marriage referendum in Dublin on May 23rd, 2015. Photograph: Paul Faith/AFP/Getty Images

Archbishop Diarmuid Martin is of course correct. The Catholic Church does indeed need a reality check in the wake of the same-sex marriage referendum.

As the unequivocal result of the referendum became clear he said: “I think really that the church needs to do a reality check, a reality check right across the board, to look at the things it’s doing well, to look at the areas where we really have to start and say, ‘Look, have we drifted away completely from young people’?”

It’s not just young people. The people who voted for this referendum included tens of thousands of practicing older Catholics in the cities, towns and countryside of Ireland. People who will continue to practice their faith but who no longer accept that their gay sons, daughters, brothers, sisters, grandchildren, even their gay parents, are “objectively disordered” with a tendency to evil, as their Church teaches.

It is an irony that those who opposed the referendum out of concern for the family were defeated by the family. The difference being that the No family was a concept, whereas last Friday’s Yes families were flesh and blood, living, breathing, flawed, impossible, loving humanity.

Archbishop Martin was right also that the referendum result illustrated “a social revolution that didn’t begin today.” But it is one the church, all churches, have disregarded for more years than they care to be reminded, and to their detriment.

All the churches are in a similar situation to that of the Catholic Church. All are suffering a dramatic decline in attendance at their services. All now have scant presence in urban working class areas. All are failing to attract young people. And where attendance in middle class and rural areas are concerned, it is ageing and not being replaced.

It is not just the Catholic Church that needs a reality check.

There are growing numbers of lively evangelical new churches but these are generally small in size and disparate in location throughout the island. If anything, they are even further removed from the reality around them, lost in a bubble of fervent zeal.

Where our major church is concerned, the facts are stark and indicate that the Catholic church as it was throughout the 150 years from the mid 19th century until the 1990s is gone. The average age of the Irish Catholic priest today is 64. He retires at 75. As the Americans say, ‘you do the math’.

Within five years Dublin’s Catholic archdiocese will barely have one priest for each of its 199 parishes, according to its own figures. This is replicated throughout the island. The Association of Catholic Priests has been appealing to the bishops to do something about this since it was founded five years ago, but they have been ignored.

Yet, there is hope. It rests with those priests who listen to and remain close to their people; those men in parishes throughout Ireland without whom the church would have been washed in the tsunami of scandals. It is such priests who bring solace and comfort to gay people in their congregations as they discover their identities and who then help ease families into accommodating that identity.

Some of these priests did not read their bishop’s pastorals on the referendum at Masses out of sensitivity to gay people and their families in the congregation. Some priests went public saying they were voting Yes and why, enabling other Catholics feel free to exercise their conscience on the matter.

The bishops might listen to their priests, who deal on a daily basis with that reality the bishops now feel a need to check.

For Archbishop Diarmuid Martin, the referendum campaign appears to have been something of a lower case via dolorosa. He began last February by appealing for sensitivity in the language used about gay people during the campaign, something other bishops did not ‘get’.

He has a good record with minorities in Dublin. Relations between his church and Protestant denominations in Dublin have never been as close or personally warm. It is similar where other faith groupings. And he has had close pastoral relations with gay people in the city and their representative groups. It was clear his heart was with them in this campaign but his church was not.

Such was the perception of his stance that in an address at All Hallows College on May 6th last he said he was voting No. “I say so publicly because in a recent curious report in the Irish Catholic, the editor of the Catholic Voice is quoted as saying that I had ‘confused’ the press by my attitude to the referendum and had given constant solace to the Yes campaign,” he explained.

He continued: “The occasion for the ‘confusion’ was a lengthy address I gave to the Iona Institute, the content of which neither the editor of the Irish Catholic or that of the Catholic Voice considered worthy of reporting.”

He was referring to an Iona Institute address he gave on March 19th where he set out “what my concerns about the referendum were based on”.

He was shouted down at the meeting when he did so.

As he put it in an article for this newspaper last Tuesday he had “no affiliation with any group of No campaigners . . . I have said that I intend to vote No, yet there are those of the ecclesiastical right wing who accuse me of being in favour of a Yes vote, since I do not engage in direct condemnation of gay and lesbian men and women.”

While many on the No side had genuine concerns about this referendum, others used such concerns to mask their real intent which was the “direct condemnation of gay and lesbian men and women.”

Such groups on the “ecclesiastical right wing” have, over many decades, been the ugly tail that has wagged the Catholic Church dog on sexual morality issues in Ireland. It is the bishops’ fault that they have allowed this, again and again, resulting only in their increasing marginalisation from Irish Catholics.

They might begin their “reality check” by consigning that “ecclesiastical right wing” to where it belongs.