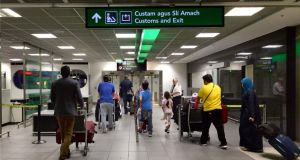 A scheme to regularise the legal position of about 26,000 undocumented migrants, including up to 5,000 undocumented children, could generate “a potential €185 million over five years”, an Oireachtas committee was told yesterday.

Helen Lowry, a community worker with the Migrant Rights Centre of Ireland (MRCI), addressed the committee on justice, in the company of Jayson Montenegro, an undocumented worker from the Philippines.

Mr Montenegro is also one of the six original founders in 2010 of Justice for the Undocumented, which now has more than 900 members. Ms Lowry said the vast majority of undocumented migrants had entered the State legally. They lived in constant fear of being “caught”, could not report crimes against them, and many had “real heartbreak in their lives” due to being unable to go home to see their families.

“The people we work with have the same struggles, hopes and dreams as undocumented Irish in the United States. They too would like to be able to return home to see their loved ones,” said Ms Lowry.

Mr Montenegro said he came to Ireland in 2003 having been promised a work permit. He left his wife and family when his youngest child was aged five. He has not seen his son, now 17, since. He realised after a number of years he would not get a work permit and he remains undocumented, working as a carer. The remittances he has sent home have paid for his children’s education, including putting his two daughters through college.

“I miss my children. I miss them growing up. At Christmas my son asked, ‘Do I know you dad?’ My life stopped when he asked this question because I didn’t know how to answer it. I always say I am doing this for your future.” The first thing he would do if he was regularised would be to go and see his family. The MRCI is calling for a scheme to regularise undocumented people who have been here for four years or more, though those with criminal convictions would be barred. They would pay an administrative fee, which would bring in up to €11.5 million.

The exchequer would also gain about €7.5 million as these workers would all be paying taxes and employers paying PRSI contributions would bring in up to €20 million a year. Ongoing immigration registration fees would generate up to €5 million per year. “In total this scheme has the potential to generate €185 million over five years,” said Ms Lowry.

1 ‘It was pitch black’ - Rescued teenager describes night afloat with her cousin in Galway Bay
2 Aaron Brady, the man who said with pride he was a cop killer
3 A million trees, including 400,000 oaks, to be destroyed this week
4 Garda killer Aaron Brady will be almost 60 by time he leaves prison
5 Mike Pence fretting as Kamala Harris shakes up Republicans
Real news has value SUBSCRIBE