Rainbows come out over the crowd at Dublin Pride Parade

Panti Bliss: ‘If I was straight I would be raging... look how much fun it is being gay’

A record breaking crowd attended the Dublin Pride Parade in the capital today with over 40,000 people, a dozen floats and 70 different groups participating in the annual colourful celebration of the LGBTQ community . Video: Bryan O'Brien 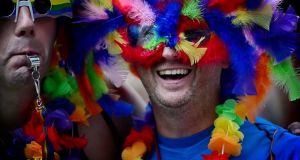 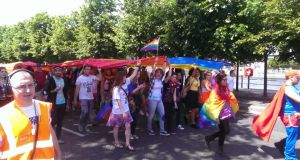 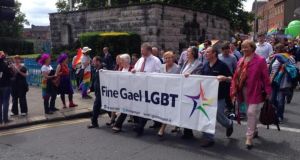 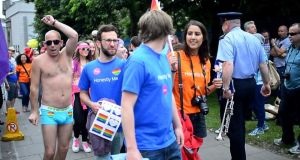 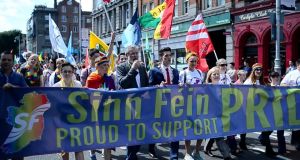 The clouds have given way to sunshine and rainbows on O’Connell Street today as the Dublin Pride parade gets into full swing.

“If I was straight I would be raging... look how much fun it is being gay,” the (fabulously dressed) drag queen Panti tells the crowd as she passes on a open topped bus.

Near the front of the parade the Garda band are joyfully playing the Jackson Five and when the music fades it is replaced by the sounds of hundreds of whistles, then samba, then a blast of dance music punctuated by shouts of “Happy Pride!”

Forty years after he took part in the first protest against anti-gay laws in Ireland Senator David Norris is a mini celebrity among the Dublin Pride paraders.

“It’s lovely to just watch and to be on the sidelines,” he says (despite being stopped every few feet by well wishers and people asking him to pose for a selfie with them).

“I feel there’s no need to be proud of being gay, it’s just a neutral fact but it’s part of a historical process. When you’ve been sat on for a long time you have to kind of come up and show yourself.”

Referring to the forthcoming referendum on same-sex marriage which is planned for next spring he said he expected the Dublin Pride parade will “continue when we have complete equality”.

“But it will continue more as a celebration, it’s becoming more and more of a celebration rather than a protest,” he says.

It is a sentiment echoed by members of the LGBT Society in University College Cork, who wear smiles on their rainbow-painted faces in anticipation of the parade.

“In the space of 20 years we’ve come from decriminalisation... to almost full civil marriage for same-sex couples and that’s an amazing breakthrough,” the society’s auditor James Upton says.

He says Dublin Pride is about “coming together to celebrate our individuality” but adds that the day is also about breaking down barriers between the straight and gay communities.

“We’re constantly making progress and Pride is one of the biggest ways you can do that. It’s celebrating who we are and showing that we’re a big movement and that we want their support,” he says.

“That’s how the referendum is going to be won is by changing the attitidudes and behaviours of people sitting around kitchen tables and through that we’ll change the culture of the country.”

“Gay, straight, anyone who wants to play can play, we don’t judge,” he says.

So what does Pride mean to him? “It’s everyone showing that Ireland is as one and no matter what your sexual orientation is you can be proud of who you are. And that’s what it’s about - be proud every day not just today.”

Laura Braxson of Vegan LGBT Ireland says “being able to march through the streets with our banners... and being safe and being visible and being part of something so joyous is a wonderful experience.”

However Maria Keogh, who became the first female director of the Gay Switchboard Ireland earlier this month, said the 2,800 calls received by the organisation last year were testament to the needs of gay people who continue to suffer isolation because of their sexual orientation.

“We’re very aware that there’s people today who can’t come out and celebrate as openly as we are... we’re trying to improve that for people and let them know that there are services there, that there are groups there,” she says.