The suicide of a Tipperary farmer jailed over debt to a sub-prime lender sparks protests in Dublin. 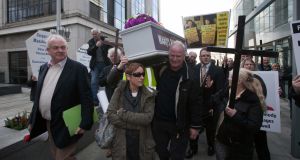 People march during a New Land League protest in Dublin on Tuesday to highlight financial pressures on people from banking and financial institutions. Photograph: Gareth Chaney/Collins

Dozens of people carrying a coffin and black crosses gathered at a bank and the offices of a subprime lender in Dublin today to raise awareness of distressed borrowers who have taken their own lives.

The two peaceful protests organised by the New Land League on Tuesday also highlighted the ongoing sale of mainstream banks’ loan books to “vulture” funds at discounts of as much as 80 per cent.

Many of those who joined the protest have spent years fighting legal battles with lenders to hold on to family homes or farms.

Some have been successful, while others have been forced to surrender homes. For others, the fight is still going on.

Geraldine Costello, whose husband Eugene was jailed in 2014 for contempt of court after failing to hand over land repossessed by a company called Carlisle Mortgages and is facing further legal action in the weeks ahead, was also at the protest.

“Living with this stress has taken all the joy out of our lives,” she told The Irish Times. “And it has been going on for 10 years.”

The protest was led by activist Jerry Beades, who said Ulster Bank was selling a portion of its agricultural loan book in the days ahead to what he said would almost certainly be a “vulture” fund.

He called on the Government to intervene to force the bank to first offer to sell the debt to those who had borrowed the money with the same level of discount.

Subprime lenders, he said, had offered people short-term funding at initially low rates of interest and promised them that the refinancing would help them repair credit ratings and allow them subsequently to secure cheaper financing elsewhere.

In many cases the promises never materialised, which led people deeper into the debt swamp. “Once you got involved with [subprime lenders], the mainstream banks would not touch you. People were caught. They did not know what they were getting into,” he said.