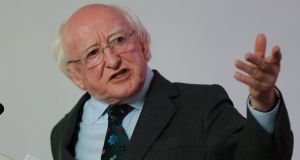 President Michael D Higgins: “There are now more refugees and people forcibly displaced than at any time since the second World War, and this is one symptom of a great failure by the international community to address the factors causing people to flee.” Photograph: Nick Bradshaw

President Michael D Higgins has urged governments to match words with deeds when it comes to addressing the refugee crisis.

Welcoming a draft United Nations declaration on tackling the issue, which was negotiated under Irish and Jordanian leadership, he said financing and commitment to implementation would be paramount to its adoption.

The 193 member states of the UN agreed in principle the terms of the joint approach in preparation for a UN summit on migration and refugees to be held on September 19th.

As world leaders prepare for the first summit of its kind – addressing large movements of people displaced by wars and other humanitarian issues – Mr Higgins has called on governments to assume greater responsibility for their welfare.

“Internationally, there are now more refugees and people forcibly displaced than at any time since the second World War, and this situation is one symptom of a great failure by the international community to address the factors causing people to flee,” he said.

A record 65 million people have been forced from their homes with 10 million now considered “stateless”.