Population at highest in over 150 years despite high emigration 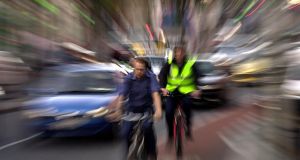 A busy street in Dublin. The census results point to a continued shift in population growth towards the greater Dublin area since the last census results in 2011, with decreases in the Border and western areas. File photograph: Matt Kavanagh .

Today’s census figures are expected to show the Republic of Ireland’s population has climbed to its highest level in more than 150 years despite high levels of emigration.

The results will also point to a continued shift in population growth towards the greater Dublin area since the last census results in 2011, with decreases in the Border and western areas.

While Ireland has some of the highest levels of emigration of any European country, our relatively high birth rates mean the country’s population is expected to have reached about 4.65 million, up from 4.58 million five years ago.

While the population has been growing for the past five years, it has been at a far slower rate since the economic crash.

Justin Gleeson of the All-Ireland Research Observatory based at Maynooth University, said there has been a monumental change in population growth over the past five years.

“In the last two census periods we saw major population increases of about 8 per cent,” he said.

“Now, we’re seeing much more marginal increases of about 1.5 per cent. While the natural population increase [births minus deaths] is still very positive in Ireland, the major contributory factor to this lower population growth is the change in net migration flows.”

Net outward migration, the numbers of emigrants minus immigrants, has fallen from about 30,000 five years ago to 11,000 last year.