One of last Ballymun tower residents prepares to leave 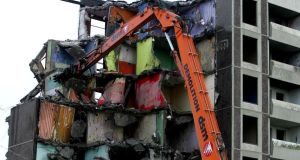 File photograph of a block of flats in Ballymun being dismantled. Photograph: David Sleator/The Irish Times

One of the last remaining residents in the Ballymun towers recalled her mother dubbing it Ireland’s answer to New York as she prepared to move out tomorrow.

Theresa Freeman, who lived for 20 years on the top floor of the Joseph Plunkett tower, spent the weekend sorting her belongings on the 15th floor ahead of the bittersweet move to a bungalow.

Ms Freeman (47 )recalled how her mother Brigid thought the complex was like Manhattan when she first moved to the area in the 1960s.

“I’m very sad to leave the flats now, I’ve so many memories here,” she said.

“When my mother moved to a home here for the first time she thought the place looked like New York.

“My family has grown up here with me, but I’m trying to downsize now. I’ve a lot of things I’ll just give to the charity shop. And I’ve a three piece suite I can’t take with me.”

Another five families remain in their flats in the Plunkett block and talks are continuing with Dublin City Council officials to find them suitable new accommodation.

Ms Freeman has been in Ballymun since the late 1970s.

She said her home for more than half of that, on the top floor in the Joseph Plunkett tower, was comfortable and secure.

“It had a good neighbourly feel in the block. People who cared. We’d 20 good years here with my daughter growing up,” she said.

The Ballymun regeneration masterplan was unveiled in 1998. It will take another step closer to completion next year when the remaining towers are demolished, inlcuding the 15 storey tower and two eight storey blocks.

The Plunkett tower, one of the original named after the signatories of the Proclamation, is a 42-metre, 8,500-tonne building. It housed 90 families in 30 three, two and one-bed units.

Mary Taylor, the council’s assistant area manager, decisions will be made over the next months whether it can be taken down mechanically or through controlled explosion.

“For a lot of people, leaving is quite hard. It’s their home,” she said.

“Moving residents is an ongoing process of negotiation. I suppose if you lived in a particular way for a long time it’s hard to change, but when a lot of people do move they are happy.

“On the ground floor it’s a different way of living, there’s the option of a garden, there are streets to play on.”

The City Council said the regeneration plan has provided more than 2,000 social houses alongside increased stability for the wider community with a gym, pool, arts centre and ongoing work on the town centre.