Opinion: Involvement of an obstetrician in assessing suicidality is an odd inclusion in the legislation 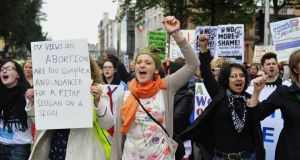 If it is true that politics is the art of the possible, then the Protection of Life During Pregnancy Bill 2013 may be the apotheosis of that art form. It has drawn outright condemnation from anti-abortion activists, while eliciting frank disappointment from those who support a more liberal regime. It goes as far as possible in enshrining the X case judgment while being scrupulous in its accommodation of those for whom abortion due to suicidality in pregnancy borders on anathema.

The road ahead is uncertain. What has been published are only “heads of Bill”: a thumbnail sketch of the form that legislation might ultimately take. In the interim, there are two broad headings under which the Bill can be considered: what it contains and what it omits.

The most obvious inclusion concerns suicidal thoughts and threats in pregnancy. Where a real and substantial risk to a woman’s life is presented by an emergency that is, in turn, caused by a physical illness, then a termination may be performed with the imprimatur of a single doctor. Where a physical illness presents a real and substantial risk to the life of the mother, other than in an emergency, then the certification of two doctors will be required.

However, where the real and substantial risk to the life of the mother arises through the threat of suicide (coyly termed “self-destruction” in the Bill), then three doctors are required to certify the lawfulness of an abortion. What is particularly curious is that this three-doctor requirement is universal in the case of the threat of self-destruction: it holds true even where the threat of suicide arises in an emergency situation. Unlike her physically ill counterpart, the suicidal pregnant woman in a life-threatening crisis must nonetheless be subjected to the ministrations of three doctors.

A further observation about the three-doctor test (which is, in my opinion, one doctor too many) concerns the insistence that the three doctors assessing the risk of suicidality should include an obstetrician. This seems an odd inclusion in that I do not recall anyone in the debate about legislation to date (at, for example, the Oireachtas health committee hearings) advancing a thesis that obstetricians are qualified to make the relevant judgments about suicidality. If that is so, what practical purpose is achieved by incorporating obstetric opinion into this facet of the legislation? And there is a curious and potentially problematic corollary: the decision of the three doctors assessing the threat of self-destruction and the requirement for an abortion must be unanimous.


Effective veto
There is at least the prospect (admittedly an unlikely one, but no less unfortunate for all that) of an obstetrician exercising what would effectively be a veto over the decision of the more-qualified psychiatrists on the question of suicidality.

There is much to be teased out on the question of sucidiality. Is it acceptable, as a matter of principle, for the equal treatment of suicidal women (as opposed to physically ill women) to be sacrificed on the altar of political expediency? Or, as the defenders of the provision have argued, is there something necessarily elusive about the nature and detection of suicidality that objectively justifies such apparent discrimination in the heads of Bill?

Setting aside for a moment that there is no definition of what is meant by a “third party”, the wording of the relevant sub-head seems to suggest that, where lawful, an “institution etc” is obliged to provided a lawful termination where requested, even if (a) to do so would be contrary to its ethos; and (b) perhaps more problematically, where no doctor in the hospital in question would be prepared to do so. For this section to work, it would appear that every “institution etc” would have to employ at least one person who would be prepared to carry out lawful terminations, such that the “institution etc” would not fall foul of the law.


Case law
Recent case law might give the Government pause for thought: two weeks ago, an appeal court in Scotland determined that the right of conscientious objection afforded to clinical staff under the UK Abortion Act 1967 was wider than previously thought: “In our view”, the court stated, “the right of conscientious objection extends not only to the actual medical or surgical termination but to the whole process of treatment given for that purpose.”

The court ruled, therefore, that two Catholic midwives from Glasgow could not be compelled to delegate to, supervise or support staff on their labour ward who were involved in abortions.

The other aspect of the heads of Bill concerns what is missing. Gone are the provisions dealing with lethal foetal abnormalities and inevitable miscarriage of the non-viable foetus which were contained in the draft Bill I submitted to the Oireachtas committee hearings earlier this year. Perhaps that is understandable: the heads of Bills are intended, after all, to “legislate for X”.

However, the X case remains an incomplete account of abortion law in Ireland under Article 40.3.3 and this limited legislation ensures that many of the saddest of abortion cases will continue to be dealt with in Britain and that, sooner or later, the abortion issue will return – as convulsively and divisively as ever– to the foreground in Irish public discourse.


Simon Mills is a barrister, former doctor and author. He presented a draft Termination of Pregnancy Bill to the Oireachtas Committee on Health and Children in January.