The fourth Traveller Pride Awards, which honour the achievements and contributions travellers make to their own community and to Irish society, were held in the Pillar Room, Rotunda Hospital in Dublin today. 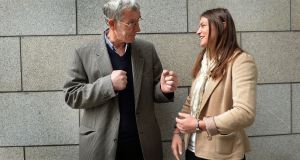 Taylor turned up at the Traveller Pride awards today to present an award to Savanna McCarthy from Kerry who is the captain of the Ireland under-17 ladies team.

Taylor, a former Irish soccer international herself, said it was an “absolute privilege” to be at the event and Irish boxing would not be the same without the travelling community.

“I faced a lot of discrimination myself growing up through women’s boxing. I can definitely relate to them. There are a lot of similarities between the two of us,” she said.

“I definitely know what they are going through. I also know that they have just to stay focused and keep going. Great things will always come around.”

Taylor is currently preparing for the European Union championships in eight weeks, her first competitive tournament since the Olympics.

She laughed off suggestions that she was now wealthy from endorsements as a result of her Olympic gold. “There’s not a whole lot of money flowing in, believe me. I’m supposed to be buying a €1.1 million house. Don’t believe everything you read in the papers. It is a tree house,” she said.

“I have had all these questions over the last few months about moving out (of home) and boyfriends and this, that and the other. I’m here to box really.”

Also present at today’s prize-giving ceremony in the Rotunda Hospital, Dublin, was Olympic silver medalist John Joe Nevin who was guest of honour.

Nevin is preparing for the European Championships at the end of May. “I’m so proud and there’s so much talent here,” he said. “It is great to be part of the travelling community.”

The youngest person at today’s awards was Michael Bernard (Bernie) Mongan, the five-day-old son of Kelly McDonagh Mongan who got a Travellers Pride award in the music category.

The 19-year-old became a star of The Voice even while heavily pregnant. She gave birth on Sunday in the Cork University Hospital. “I’m tired, but the adrenalin is keeping me going,” she said.

The overall award went to Tom McDonnell and James Collins, two traditional traveller tinsmiths who are intent on passing their skills to the next generation.

The community award went to Jim O’Brien who began working with Bray Travellers’ community Development Group 20 years ago, the education award went to Christy Moorehouse who has trained as a drugs therapist and Mary Maughan received the youth award for her outstanding contribution to the community at local and national level.