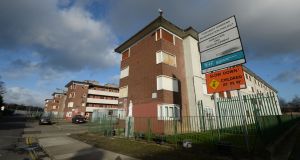 Built in the 1950s, O’Devaney Gardens was to have been redeveloped under a public-private partnership between the council and developer Bernard McNamara, but the deal collapsed in 2008. Photograph: Dara Mac Donaill

The redevelopment of O’Devaney Gardens, one of Dublin’s bleakest flat complexes, is facing significant delays because of a decision to make it a public rental-only estate, the council’s housing department said.

Councillors last week gave approval for the demolition of the last four blocks totalling 128 flats, which would fully clear the site, to make way for a new development of almost 480 homes.

But councillors also voted in favour of a motion from Workers’ Party councillor Éilis Ryan requiring all of the new homes to be “public, mixed-income housing”.

Under this scheme, all housing on the site would be rented from the council, with 50 per cent of homes rented to applicants on the council’s housing waiting list, and 50 per cent rented to households earning above the social housing threshold, but with “demonstrated housing need”, who would pay higher rents in line with their income.

The council will start to demolish the flats this month, and said it could proceed immediately with the social housing element, but the council’s executive housing manager Tony Flynn said Ms Ryan’s motion would block that plan.

Planning permission for the first phase of the redevelopment, with 110 homes – 60 of which would be social housing and 50 private – was granted by An Bord Pleanála in 2011 and could be implemented.

In addition to requiring fresh planning permission, which could push the start of construction into next year, or beyond, the scale of the project, which under the councillors’ resolution would have to be publicly funded, would require the council to undertake a Department of Public Expenditure and Reform cost-benefit analysis because it would exceed €20 million, Mr Flynn said. This “will delay development opportunities for O’Devaney Gardens as all options must be considered when utilising funding from the exchequer,” he said. “The numbers just don’t stack up,” he said, adding it would cost €6.5 million just to put in the infrastructure needed.

However, Ms Ryan said her proposal was viable, had the support of all councillors and she was determined to see it implemented.

“There is a new demographic which wants to rent long term, so public rental is attractive to a greater number of people. This is a financially sound proposition.”

The 1950s flat complex, close to the Phoenix Park in Dublin, was to have been redeveloped under a public-private partnership between the council and developer Bernard McNamara, but after several delays the deal collapsed in 2008.

Most of the almost 300 flats had been emptied by that time in preparation for the regeneration scheme. Demolition of vacant blocks began in September 2008. The council drew up plans to redevelop the estate using public money and got planning permission in 2011, but in 2012 conceded it could not get the €32 million needed and shelved the project.

Last July the council said O’Devaney Gardens would be included in its vacant lands initiative under which it hopes to attract housing providers to build a mix of social, affordable rental and starter homes on council land.