About 140 counted on city’s streets, but Peter McVerry says true number is twice that 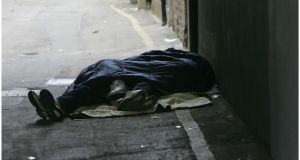 Figures to be published today are expected to show the number of rough sleepers in Dublin has increased by about 40 per cent in seven months, and by more than 50 per cent in a year.

The count was conducted by the Dublin Region Homeless Executive (DRHE) last week. Sources say about 140 individuals were found to be sleeping on the streets and in doorways. This compares with 102 found during the spring count on April 24th and with 91 found in the winter 2015 count, conducted on November 30th, 2015.

Though the numbers have increased, they remain some way lower than the 168 found sleeping rough in Dublin in the winter 2014 count. Conducted on November 11th, 2014, it was three weeks before the death of homeless man Jonathan Corrie (43) in a doorway near Leinster House. His death caused outrage at the numbers sleeping rough and led to an “emergency summit” of stakeholders and NGOs, chaired by then minister for the environment, Alan Kelly.

Fr Peter McVerry, founder of the Peter McVerry Trust, said the count identifies “only about half the real number of people sleeping rough each night”.

In addition to those adults sleeping rough and the 70 in Merchants Quay, the most recent data for October show during the week of October 24th-30th there were 2,065 children, 1,421 parents and 1,660 adults without child dependents in emergency accommodation in Dublin, giving a total official homeless population of more than 5,350.

Three new emergency hostels are due to open on Friday, December 9th, in Dublin 7 and Dublin 8, providing an additional 220 beds for homeless adults – an average of 73 beds in each.

Though these beds are welcome, a spokesman for the Peter McVerry Trust said it would be preferable if smaller hostels were opened more regularly.

“There is an argument that the [homelessness] sector should open a smaller, new hostel every month to cope with the net increase, instead of these big hostels every winter. We are meant to be moving away from big institutional settings, but it seems we’re going back to that.”

Seven adults without children were becoming homeless each week in Dublin, he said, and the trend should be more closely monitored.

“Really there should be a rough-sleeper count every month, not just twice a year, to stay on top of what’s happening on the ground.”

The DRHE said the street count was necessary to confirm “a minimum number of people sleeping rough on the night in question in the Dublin region.

“[It] assists us in measuring the effectiveness of the regional strategy, in addition to planning for services.”