No comment: Offices and officials mute on Traveller controversy 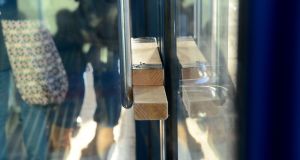 Louth County Council offices were bolted shut yesterday and the council’s officials were staying quiet on the ongoing controversy concerning the Traveller families who were evicted last week in Dundalk.

The council official who advised the families, evicted from an unofficial site, to put their children into care as a solution has refused to comment.

The official,asked by phone about the claims made by several Traveller families said: “No comment”.

Three mothers, two of whom did not want to be named, told The Irish Times the official had put it to them on Monday, at a meeting to discuss their housing situation, that the women could go to the refuge in Dundalk, the men to a hostel in Drogheda, and that he could arrange for the children to be placed in care.

Brigid McDonagh, a single mother of a five-year-old girl, said the incident had left her “afraid to go near the council now. You’d be afraid all the time they’d take your child from you”.

Asked yesterday whether he had suggested placing children in care, the official said: “No comment.”

Asked whether it could be a solution for the families, he said: “No comment.”

Some 23 families were evicted from the Woodland Park site on the outskirts of Dundalk in the last week, having been served with eviction notices on Wednesday, January 13th.

Gardaí arrived on site two days later, some in riot gear, to enforce the evictions. Families described the manner of the evictions as “heavy-handed” and said children were “terrified”. They said they had nowhere else to go.

The council cited health and safety reasons for the evictions, following a fire audit of the site in October 2015. This was conducted in the wake of the Carrickmines tragedy on October 10th, 2015 in which 10 people died in a fire at an unofficial Traveller site in Dublin.

It continues: “While [the document] sets out an approach to dealing with . . . safety issues associated with increased numbers of dwellings in confined sites, nothing in this . . . process is intended to be used to address broader Traveller accommodation issues in a negative way.”

Five of the Woodland Park families with young children have been accommodated in B&Bs – with their bookings extended to January 29th.

Of the remaining families, 15 have moved to a vacant site adjacent to Dundalk retail park with no electricity, running water or toilets. Though told verbally on Wednesday, by gardaí, to leave they remain there this weekend. It is unclear who owns it, an issue the council is seeking to clarify. Though no one has come forward to assert ownership, they fear being asked to leave at any moment.

A number of couples without children, including one pregnant woman, have been sleeping in their cars.

The majority of the families say they want to return to Woodland Park, which was an official halting site until 2007/08 when, says Louth County Council, it fell into disuse after families left it.

The evicted residents, members of the extended McDonagh-Quinn and Maguire families, moved on to it last April. From the Dundalk area, they say they lost their homes in the private rented sector or were living in overcrowded conditions. They rigged up a water supply, provided electricity generators and bought Portaloos.

A spokeswoman for the council said: “Future plans for the site are being discussed with the Louth Traveller Committee as part of identifying solutions for the long-term accommodation needs of Travellers.”

Appointments with the council about housing were cancelled yesterday as a protest got under way at the entrance to council grounds.

The council front doors were locked at about noon. Wooden bars were fashioned together as a makeshift bolt.

Travellers from Tipperary, Meath, Waterford, Sligo, Clare, Limerick and Dublin were there to support the protest calling for Traveller housing for the families, with representatives from Pavee Point and the Irish Traveller Movement.

Rebecca Quinn, spokeswoman for the families, told protesters the families had been evicted “on the basis of health and safety”.

She said the families had been “emotionally traumatised” by the events.

“Families who went in were told, if they declare themselves homeless that their children will be taken into foster care. They [council officials] cannot get away with this.”

Local TD Gerry Adams called on the council to draw down capital funds from the Department of the Environment, dedicated to Traveller accommodation to refurbish Woodland Park. He described this as the “obvious solution”.

Labour TD for Louth Ged Nash said it was “critical” the views of the Travellers were acted on. “The interests of the families affected should be absolutely paramount.”