Local election candidates set out their visions for future of borough 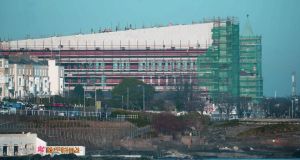 The new central library and cultural centre in Dún Laoghaire. One woman suggested €2 million would be “worth spending” to demolish the new building. Photograph: Cyril Byrne/The Irish Times

Dún Laoghaire’s new seafront library, the cost of car parking in the area and social issues, including housing and drug treatment facilities, were raised by local election candidates and members of the public at a packed meeting this week.

The library, which has been the subject of controversy on account of its size and design, was described as a “monstrosity” by some speakers at the meeting organised by the Dún Laoghaire-Rathdown Ratepayers Association.

The new Central Library and Culture Centre is due to open in the autumn, at an estimated cost of €36.6 million. It will have rooms for local art and community groups as well as a 100-seat auditorium, cafe, reading and public internet area, a gallery and a local history room. The crowd of more than 100 cheered and clapped when a woman suggested €2 million would be “worth spending” to demolish the new building.

Donna Pierce (Labour), who joined the council last September to replace Stephen Fitzpatrick following his resignation, said she would not have voted for the library if she had been a representative at the time. “It’s not an appropriate use of money when Dún Laoghaire is in crisis,” she said. “I do believe in more accountability.”

Jeanette Kavanagh (Sinn Féin) said housing lists stood at 4,200 and she wanted to reduce them by 30 per cent. Ms Kavanagh, who was a chairwoman for a south Dublin community centre for four years, also said she had collected more than 1,000 signatures on a petition to reduce parking fees.

Replying to questions on whether drug-treatment clinics could be moved out of the town, councillor Patricia Stewart (Fine Gael) defended their success in helping people recover from their addictions. “We’ve been told it cannot be moved,” she said.“These are also people in our community. All of them are going to the centre because they are trying to get off drugs.”

Karl Gill (People Before Profit) said he wanted to tackle youth problems.“There’s absolutely no nightlife in this town. Festivals have been shut down and there’s nowhere for young people to go.We need to stop the decay of the main street. Support needs to be put in place for people who are willing to do things in this town.”

Mary MacHale (Independent) said she was committed to reducing property tax by 15 per cent. Ossian Smyth (Green Party) said he would push for an urban renewal expert to be hired. “People are angry. There’s been a lack of judgment and attention [to details].” James McCann (Fianna Fáil) said he wanted to get young people back into employment through retail.

Michael Merrigan (Ind), who is being supported by the Dún Laoghaire Community Association, said he wanted Dún Laoghaire to be converted into a “university town” and to build an international university campus. Councillor Melisa Halpin (People Before Profit) said the community development plan was in draft and changes could be made. Councillor Victor Boyhan (Ind) said change was needed in council chambers. “We need new voices, new faces and new vision.”

At the end of the night, there was criticism from a member of the public about the contributions having been “negative” and political. “I came here to express my views. I’ve never heard such negativity. You can do a lot of things better when you think positively.” He said the people of Dún Laoghaire needed to “walk together and find a sense of pride” to revive the town.