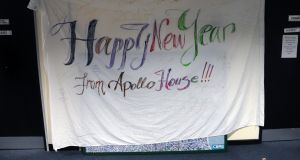 Campaigners are gathering at noon on Tuesday at Apollo House on Poolbeg Street before marching to the Department of Finance on Merrion Street to hand in a letter to Minister for Finance Michael Noonan. Photograph: Aidan Crawley

The National Asset Management Agency (Nama), in conjunction with local authorities and housing associations, “could end homelessness in 2017”, according to the Home Sweet Home group.

In a letter to be delivered to the Minister for Finance, Michael Noonan, on Tuesday, the coalition of housing activists and homeless people is calling on him to use his powers under the 2009 National Assets Management Agency Act to direct Nama to make vacant buildings available for housing.

It says Nama is making the housing crisis worse by “operating as a speculative property developer” and “adding to the economic and social costs which the State has to bear in dealing with that crisis”.

This is in contravention of its purpose, under Section 2 of the Nama Act, which is to “to contribute to the social and economic development of the State”, the group says.

Home Sweet Home is calling on supporters to join campaigners as they gather at noon on Tuesday at Apollo House on Poolbeg Street before marching to the Department of Finance on Merrion Street to hand in the letter.

In the eight-page letter, the coalition describes homelessness as “the most pressing social need facing the State today”.

As well as citing section 2 of the Act, it refers to section 14 which says: “The Minister may give a direction in writing to Nama concerning the achievement of the purposes of this Act.”

It is “incumbent” on Mr Noonan to “ensure that part of the large bank of potential housing stock under the control of Nama is used to end the homelessness crisis”.

“Nama has the finance, the land and buildings to provide upwards of 50,000 social/public and affordable housing units over the next few years, which would play a major role in addressing the housing and homelessness crisis. Indeed, Nama, in partnership with local authorities and housing associations, could end homelessness in 2017,” it says.

Of the 2,500 housing units due to be constructed with Nama support in Dublin this year, “a proportion of these units should be used to house all the families who are currently living in emergency accommodation, such as hotels and B&Bs, in Dublin”, it adds.

“Insofar as Nama is interpreting its function under the 2009 Act as requiring it to prioritise the maximisation of commercial return over its social development mandate, in order that it pay back the Nama debt as soon as possible . . . this is deeply damaging to the social fabric of the State.”

Home Sweet Home is calling on Mr Noonan to prioritise Nama’s social mandate over its commercial maximisation mandate; to investigate which Nama properties could be used to end homelessness; and to allow Home Sweet Home remain in Apollo House or provide alternative sheltered accommodation “ for a period of not less than six months”.